A few weeks ago, a rabbit moved into the fenced area of our property. The fence is of the sturdy chain link variety, about 4 feet high. It was erected by the previous owners to keep their dogs from being coyote bait. The fence serves no practical purpose for me because I have no dogs, and cats scale it without difficulty. The white tail deer sail over it with impunity. Crows and magpies fly over it, as do red lily beetles. Weed seeds fly through the fence, as do mosquitoes and the ever present wind. And, apparently jackrabbits crawl under it. It is really a useless fence – though not entirely useless – it keeps the coyotes out. And that is why the jackrabbit (actually a hare) enjoyed several weeks of unabated eating before I realized what was going on.

We have never had jackrabbits in our neck of the woods (well, prairies) before. At least, not in the past 19 years. Our urban neighbours to the south have at least one on each street corner, however. And that is, perhaps, how the rabbits arrived at our door. It is my theory that someone from the city trapped a few rabbits, and then transported them to the country and released them.

The trappers action resulted in the demise of much of my vegetable garden. All my peas, spinach, lettuce and carrots were eaten. At first I couldn’t figure out what was munching all the tender leaves, and what was excavating saucer size depressions throughout my yard. Finally I spotted a furry critter, and was surprised to see it was a rabbit. I was not pleased. 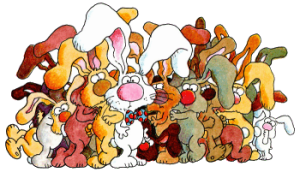 It is, of course, possible that rabbits have actually migrated into our area on their own. If they have, the four predator species that already live here will welcome a new source of game. I suspect, however, that the rabbits arrived in the same manner as many stray cats do – human transportation. Some people seem to think that the way to dispose of animals they don’t want is to drive them out to the country and turn them loose.

Foolish people. Domestic felines may be the king of the cats in an urban environment, but in a rural one they generally do not survive for long. They quickly become the hunted, not the hunter. They may outsmart the predators for a summer, but they will perish with the arrival of winter. There are places where cats should be taken if they are not wanted, and one of them isn’t my backyard.

But what to do with a pesky jackrabbit? There are two courses of action. The first is to fence them out so they don’t eat the garden. The second is to encourage their demise.