PLAN A: Christmas Day, after dinner, I started The Gingerbread. My plan was to bake four houses (one for each child) and lots of cookies. These were to be decorated the next day – Boxing Day – by all our guests. This has become a tradition here at the Red House.

And yes, I had left the making of the Gingerbread to the very last hours that the task could logically be completed…

Usually it is traditional for several people to make the gingerbread, led by our Middle Daughter – the Baker. But this year I was on my own. It didn’t take too long to mix up the first bowl of dough. Then, ignoring the instructions to chill it for 30 minutes (remember, I had started this after dinner…), I started rolling and cutting. A house came first. I chose a Bird House this year – scaled  down quite a bit from the size recommended in my clippings file. By the end of the first bowl of dough, I had one bird house, and about a dozen cookies.

The cookies – traditionally they would be Gingerbread Men, but my cookie cutter has disappeared.  I did have a replacement – my daughter had received a

set of Fred ABC Cookie Cutters for Christmas.  “ABC” stands for Already Been Chewed – one cutter doesn’t have a head, one doesn’t have an arm, and one is missing a leg. I rolled out some more dough, and made a few of each. I have to admit, they were a bit spooky. Especially the one with no head. Unsure how these cookies would be received, I looked at my other cookie cutter options. I selected a hedgehog, star, car, tree, camel and a simple house shape, and cut one of each. Then I was out of dough.

With only one house done, and three more to go,  I mixed up another batch of dough. That used the last of the molasses. I queried the Supplies and Procurement Officer, and he admitted he hadn’t bought any more molasses. Clearly I’d have to move to PLAN B. There would only be two bird houses, and the four children would each decorate half a house – and a few spooky men, and a hedgehog or two. The adults would decorate the rest of the cookies, and all would be right with the world. 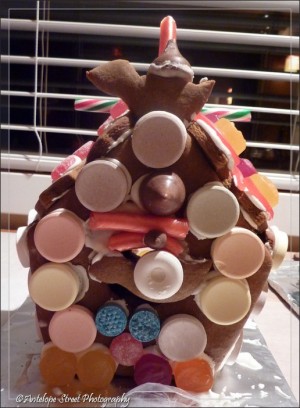 Boxing Day morning arrived. The turkey went into the oven. I made up a bowl of Decorative Icing so that I could glue the houses together before the children arrived. I had the front and two sides done on the first house when I realized that I had not cut out backs for the houses. The front of the second house would have to be the back of the first house. Now I was down to one bird house. It was time for PLAN C. I took the two roof pieces of the second bird house, formed an A-frame, and added a cookie tree on each end. Now I had a second house – a Tree House. I did the same with the roof sections of the first bird house, and made a second Tree House. Then I took the two side sections of the second bird house, formed another A-Frame, and added a house cookie to each end. Now I had a little A-Frame House. That left me with the original bird house, sans roof. Four car cookies later, and I had a roof of sorts. There – four children, four houses.

The guests started to arrive. The third wave included two unplanned, but always welcome, extras. I mentally reconfigured the seating arrangements for dinner. The last wave arrived, less three of the planned guests, two of those  folks being two of the children. I mentally reconfigured the seating arrangements again. And thought about how the remaining two children would be pretty excited that they got two gingerbread houses to decorate this year!

Our Middle Daughter, The Baker, set out bowl after bowl of candy and we were ready to get started. The Gingerbread Decorating took several hours, with each creation being uniquely suited to the tastes of the designer. The ABC Gingerbread Men that were missing an arm or a leg – they were accepted with no comment. But the ones  with no heads – each one of them were given a head replacement.