In a previous post, I rambled on about Religion. Today I’m going to talk about the Devil. But not very seriously, so be forewarned.

I’ve written this word so many times now, that it doesn’t look like it is spelled right… Do you have any idea where I am going with this discussion?

Or Devilled Eggs – you can spell it either way. Lots of things can be deviled – it simply means it is highly seasoned. I made some eggs yesterday, and they are devilishly easy to  make. Or so I thought. It turns out the devil is in the details when it comes to making this delicious cold comfort food. According to this recipe for Devilled Eggs, there is far more to boiling an egg than I had taken into consideration. And the way I hard boiled my eggs yesterday was all wrong. Which might explain why one of them cracked. 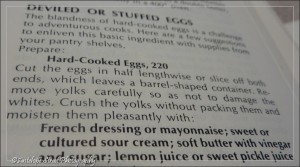 I actually looked up a recipe for Deviled Eggs in the Joy of Cooking. (My edition was the 45th printing, September 1988.) I like this cookbook, but I wish it had pictures. Then I would know how close I had come to what the recipe was supposed to look like. This cookbook, however, is well worth the effort of jumping from page to page (how to cook the eggs is not on the same page as the recipe for Deviled Eggs) because of the way the execution of the recipe is described. The description for making the filling says, “Crush the yolks without packing them and moisten them pleasantly with...” Let me repeat – moisten them pleasantly – have you ever read a recipe before that said that?

There are probably thousands of ways to make the filling for Devilled Eggs. Here is one from The Domestic Goddess who seems to have put considerable effort into deciding how best to make this recipe. Her eggs look much better than mine. She did the piping thing. Which is a good idea if you hope to get all the filling back into the egg carcasses (barrel-shaped container is how the Joy of Cooking describes them.) The filling is going to act just like a can of worms, which, once opened… well, I’ve never opened a can of worms, but you can imagine how hard it would be to put all the worms back into the can. Same with egg filling. I ended up with more filling than I had space to put it, but that was probably partly because I had one very badly distorted egg that really couldn’t be stuffed properly.

So here are my eggs. What I lack in finesse, I make up for in something…

I can’t finish up talking about eggs without sending you off to a recipe for kids called Funny Egg Fish. It also tells you how to hard boil eggs, and their way of doing it just goes to show that there is more than one way to boil an egg. So pick which way works for you best – better the devil you know than the one you don’t…

7 thoughts on “How to Make Devilled Eggs”