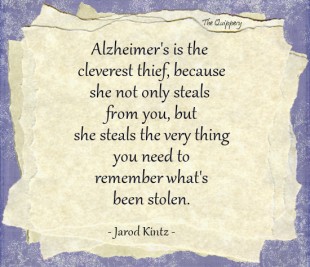 Last Monday a member of our family passed away. The dear lady was an Alzheimers patient in a Caregiving Facility. Her condition was not yet life threatening, so the family was surprised and shocked by her death. But they also took some comfort in the fact that she had been released from the ever increasing indignities of this disease.

There is no question that Alzheimers is on the rise and that it will continue to do so for some time in the future. This is because it is a disease of the aged, and people are living longer. A large group, the Baby Boomers, are just entering the first age category where Alzheimers begins to become more prevalent, so the number of patients will increase. But the big jump in death figures will come in 20 years when the Baby Boomers reach the age of 85. Alzheimer death rates rise dramatically after that age.

Considerable research is being done to cure Alzheimers. While this won’t change the fact that large numbers of people will still die of something when they are over the age of 85, it could mean that people won’t be robbed of their minds in their senior years. If there is no cure, the Boomer generation will respond with other unique coping tactics.

2 thoughts on “Alzheimers – What is the Future?”