How are you with Statistics? I get nervous whenever I see a bunch of them hanging around. I wonder what they are going to try to tell me or sell me. I know they are not liars, but I also know they aren’t exactly telling the whole truth either.

For example, last week I browsed the Canadian Alzheimer’s Society website. With statistics and prophesies, they paint a picture that suggests Alzheimers and other dementias are on the rise, and it will be a huge economic burden in the future. The society asks the reader to donate money to “keep providing vital services to people with Alzheimer’s disease, their families and caregivers and to continue searching for a cause and cure for Alzheimer’s disease.”

I don’t part with money easily, so I skipped to their financial statements to see how they use the money they collect. In 2010 they took in about $10 million from public donations. They spent $2.9 million on research funding, $1.8 million on public education, $3.6 million on fundraising and $1.2 million on general, administrative, board and committee.

Personally, I’m all for the research part, but this isn’t where the bulk of my money would go if I donated it to this Society. And while I don’t doubt that the Canadian Alzheimer’s Society does lots of good things, I would prefer to make a donation to a group that funds research for a cure. 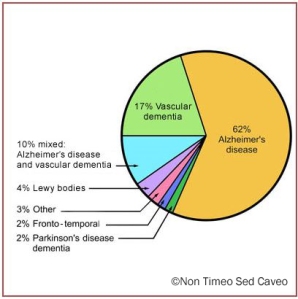 To summarize, here are the statistics on the website (in italics):

– in 2008, 480,000 Canadians had Alzheimers or a related dementia,1.5% of the population
– in 2038, 1.125 million will have this set of diseases, 2.8% of the population
These figures are based on the highest rate of population increase that the Canadian Government forecasts. The increase in percentage of Alzheimers is due to the fact that the Boomer generation will push up the numbers of elderly people. The Elderly are the ones with dementia.

– in 2008 the Economic Burden of dementia was $15 billion
– in 2038 this will be $153 billion
If the number of people who will have the disease is going to double in 30 years, why is the economic burden going to increase ten fold?

– 1 in 20 Canadians over the age of 65 are at risk of having the disease.
And 19 out of 20 Canadians aren’t at risk. This is the “glass half empty or glass half full” way of looking at things.

– 1 in 4 Canadians over the age of 85 are affected by the disease.
And 3 out of 4 Canadians won’t have it. The average life expectancy in Canada is 81, by the way, so the majority of people in the country won’t live long enough to reach the age where they are at highest risk.

The next time you come head to head with some statistics, look them over carefully. What story are they telling you? Is there another story that you should look at too?