The Pond (and I am being generous in calling it that, because it is really just a Prairie Pothole fed by melting snow and summer rain) has seen lots of activity for the past few weeks. A pair of Mallard Ducks have been assessing it’s potential as a home. I really don’t know how a duck determines whether to establish residence or not. How do they know if there is enough water there for a whole summer? The weather man certainly can’t predict that, but some years the ducks stay, and some years they don’t, and the years that they don’t stay, the pond dries up before mid season. 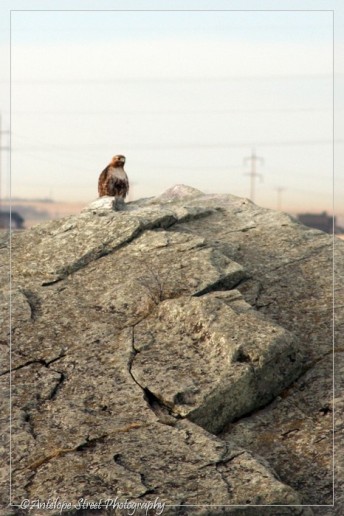 One summer, though, we had three different kinds of ducks and a family of Coots stay on. There were babies all over the place, and flight training school was just a hoot to watch. The youngsters would all paddle down to one end of what was left of open water. Then one by one they would head off, feet flailing and wings flapping, trying to become airborne. For the first few days they ran out of water before lift off, and would end up carving a path of destruction through the long grass at the edge of the pond before they came to a stop. But they all learned how to fly eventually, and it was a sad day for me when they all left home and the pond became silent again.

The pair of Canada Geese never stay to nest. In the spring they land on top of the big rock every morning and carry on an animated conversation. But after a few weeks they quit coming. This morning there was a large silent lump on the rock, and I quickly realized it was one of the Hawks. I took a picture, but just the sight of me at the door of the house was enough to make him take wing.

I might be a disturbance to the hawk, but he or she is a bigger threat to the Frogs. They started croaking a few days ago, and their chorus comes to a sudden stop when the hawk arrives.

The Deer have started hopping the fence again. They like to eat the new little tulip leaves. If I was the hunting kind, the hawks would soon see deer on their menu…