The truth is, you can’t run in Stilettos, or most High Heels for that matter. At least the average woman can’t. But that doesn’t stop some women from trying. There are many Stiletto Races staged around the world to raise money for charity, or to promote a product. One of the most recent ones was held in the Philippines. “Michelle Fernandez-Castillo, Maybelline New York Philippines’ senior brand manager, said they decided to bring the race to the country to help empower Filipinas. “The stiletto is the first thing that comes to a woman’s mind whenever she needs something to feel good and look good. Through this race, we hope to show the world how powerful women are,” she declared. 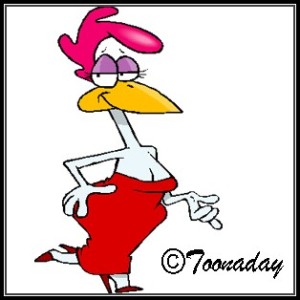 Yes, I can certainly see how the women of the Philippines will feel much better about themselves when they put on their stilettos. And they will definitely feel very powerful when they can run in them… Either that, or Maybelline is just using a clever marketing ploy to sell the Filipinas the same boatloads of beauty myths that they sell to the rest of the world.

The Stiletto Run is just wrong in so many ways. First, and foremost, is the fact that women wear those high heel shoes at all, and then run in them. Yes, I understand the term “sexy”. But why do women have to wear something so uncomfortable to be sexy, while the men watch in comfort from the sidelines? That, to me, says that the men are the ones with the smarts and the power, not the women.

Then there are High Heels in general. The foot, leg and back problems they cause are monumental, yet the number of women that wear them on a daily basis continues to climb. It is estimated that in the USA, one in five women suffer from foot problems due to wearing high heels.

Wake up women. If you want to feel good about yourself, put on a pair of sneakers and go for a walk. You’ve only got one pair of feet, and they have to last you a lifetime.

Courage is no match for an unfriendly shoe.
– Roger Moore, as James Bond –

9 thoughts on “How to Run in Stilettos – But Why Would You?”