Dressed in Black and blending with the shadows, the figures boldly advanced across the yard. Reaching their defenseless target, they struck with a vengeance. Over and over they attacked their victim. Suddenly a rescuer appeared. Arms waving, shouting words that she wouldn’t normally utter, the heroine bore down on the villains. With barely a backward glance, the cowards retreated into the anonymous shelter of dusk.

This morning I went out into my yard to view the damage caused by last evenings Vandals. (If you are disturbed by scenes of violence, you might not want to look at the following photo.) 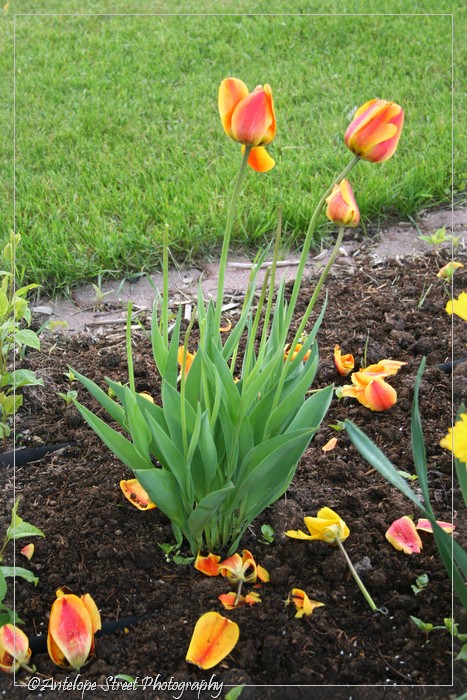 One of my Tulip Plants had been beheaded. Torn and shredded flowers littered the ground around it. I felt like crying, because I know I am powerless to stop this senseless violence.

Of course, I know the vandals, but not by name. There are so many of them, and I can’t tell if it is Joe, or Caw or Cecil who attacks tulips. They run with a gang, and they are very swift and cagey – almost impossible to photograph. Besides, they all look alike. I know that sounds like an insensitive thing to say, but that is just how it is when it comes to a Murder of Crows. It is very hard to tell one from another. And Murder – yes, that is what I felt like doing to the crow that attacked my plant…

I’ve only met one of their Species who was willing to talk to me and attempt to explain why some of his mates are so violent. He was a kindly old Raven in Arizona, who had grown fat and happy from the treats he got by posing for tourists. “Crows”, he said, “engage in complex social interactions that range from group play and hunting to gang-style killings.” My tulips – that was a gang-style killing if ever there was one.

Then there is the Magpie Gang. Around here we call them rats with wings. They are as noisy as the crows, and are notorious for stealing and eating other bird’s eggs. Also very cautious and camera shy, they construct elaborate domed stick nests that can be several feet wide and tall.

This spring, I observed the magpies nibbling at something in the lower branches of the Double Flowering Plum bush in my yard. I thought they must be finding bugs to eat, and thought nothing more of it. Until the bush bloomed.

The bush has far fewer blooms, especially in the lower branches where the magpies were feasting. Did the magpies eat the flower buds? Perhaps.

I hereby give fair warning to the crows, magpies, rabbits, deer, Red Lily Beetles and whatever is digging holes in my newly planted vegetable garden – I bark and I bite. Be wary…

The Feather Files
Name: American Crow
Species: Corvus brachyrhynchos
Native to and Migration: Some populations migrate, others are resident, and in others only some of the crows migrate.
Date Seen: May, 2013
Location: North of Calgary, Alberta, Canada

24 thoughts on “Common Crow and Magpies Vandalize the Garden”