The Swainson’s Hawks can be seen quite frequently on the fence posts across the road from us. The fence circles the 119 acre property – a mix of hay, shrub, and aspen forest that has seen only a few owners since the First Nations People called this land their home. For as long as I can remember, the land was leased to the man who ran a loam hauling business out of the grey shop in the middle of the field. He had the impression the owner would someday sell him the land, but when she died, the Estate had other ideas. The land was sold for close to three million dollars, well beyond the budget of the truck driver, or us for that matter. 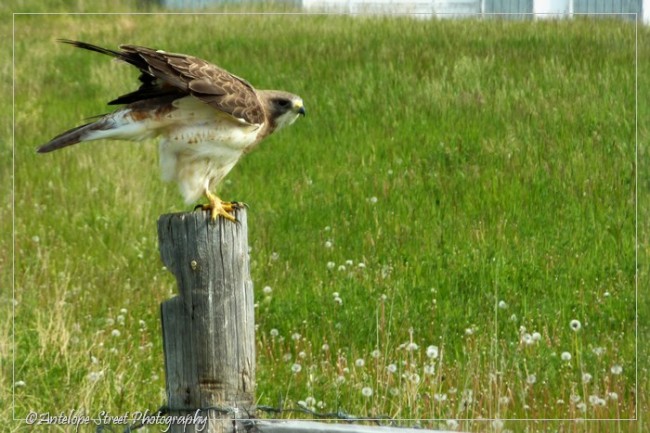 Last week a ‘For Sale’ sign appeared on the property again. The new owners had acquired a few more parcels of land next to the hay field, bringing the total up to 206 acres of land. The new price tag? Just shy of 30 million dollars. Now that is optimistic inflation!

The Feather Files
Name: Swainson’s Hawk
Species: Buteo swainsoni
Native to and Migration: In fall they fly to their Argentine wintering grounds in one of the longest migrations of any raptor. They form flocks of hundreds or thousands as they travel.
Date Seen: June, 2012
Location: North of Calgary, Alberta, Canada

23 thoughts on “Swainson’s Hawk on Fence”