Many of the old Cottonwood and Poplar trees at the Cabin have been transformed into odd shapes – a result of the weakness of heavy old branches in big wind storms. In the spring, the Canada Geese in our area land on the ‘platforms’ that have formed in these trees. The geese carry on loud conversations, and compete for the attention of – the females, I suppose. I’ve only ever seen them do this in the spring.

These two trees are on our property. The wide angle capability of my new Canon PowerShot SX50 lets me take an all encompassing photo like this from a relatively close position. This past week-end six Canada Geese landed in the trees in our yard. Can you see two of them  in these trees?

Can you see them now that I’ve cropped the photo?

One tree branch was big enough for two geese. . . 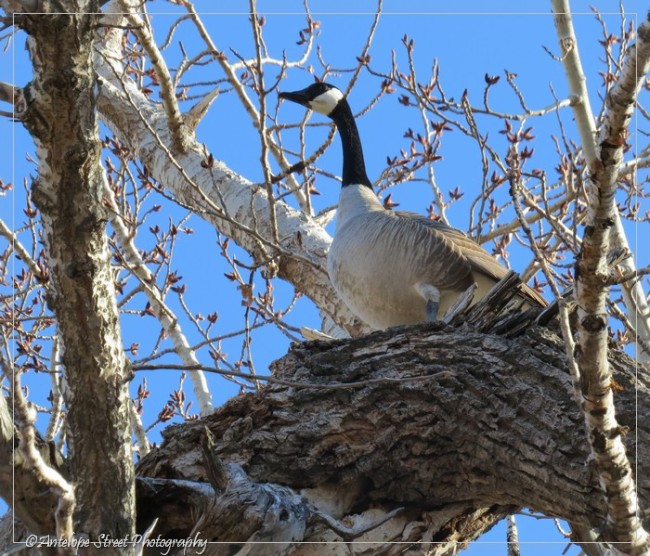 Until one goose muscled the other off the branch. 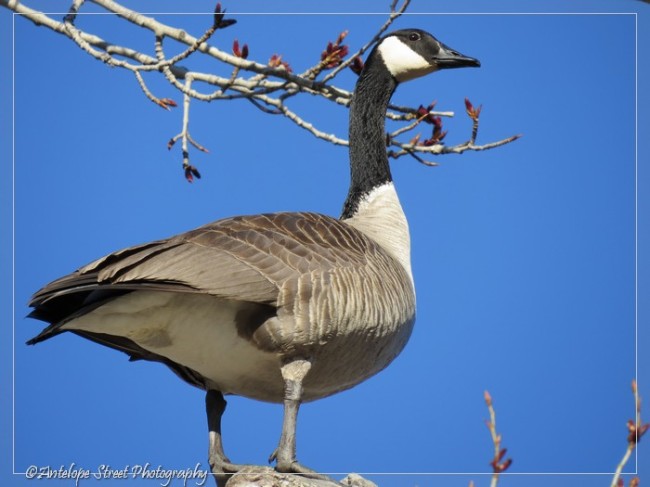 This is a photo I took with the zoom lens of the SX50. It is hand held, and the photo has not been  cropped or enhanced. The original photo is a much higher resolution, of course.

Zooming in even closer, this photo has a focal length of 215 mm, which is the maximum for the lens. I could have zoomed in even closer, but then I would have been using a digital zoom, not an optical one (digital zoom is in-camera image processing; optical zoom is the image that the lens captures.)

To put this story into perspective, six 6kg (15 pound) birds took up positions in my back yard and started to squabble over landing rights. It was truly a memorable morning!

The Feather Files
Name: Canada Goose
Species:Branta canadensis
Native to and Migration: Resident to long-distance migrant. Canada Geese breed throughout North America, except in the high Arctic and in the extreme southern parts of the United States and Mexico.
Date Seen: May, 2013
Location: North of Calgary, Alberta, Canada

That reminds me, a saltwater crocodile, a great white shark and a Canada Goose walk into a bar….
– Author Unknown –