A Pun is a type of word play where a phrase or sentence suggests two or more meanings. This could occur when one of the words has more than one meaning, or when one or more of the words sounds very similar to another word or words. Some people say puns are the lowest form of wit, but I really admire people who have the mental agility to think of them!
‘Chip ‘n Other Chip’ liked the ‘nacho’ and ‘taco’ pun the best! The following examples are my favourites.

A boiled egg is hard to beat.

A cardboard belt would be a waist of paper.

A dog breeder crossed a setter and a pointer at Christmas time and got a pointsetter.

A dog gave birth to puppies near the road and was cited for littering.

A dyslexic man walks into a bra.

A Freudian slip is when you say one thing but mean your mother.

A grenade thrown into a kitchen in France would result in Linoleum Blownapart.

A hole has been found in the nudist camp wall. The police are looking into it.

A man got hit by a train and broke his left arm and his left leg. He’s all right now.

A man’s home is his castle, in a manor of speaking.

A man tried at assault me with milk, cream and butter. How dairy!

A nut named Hazel held up a bank by saying, ‘Give me all the cashew have.’

A piano fell down a mineshaft, and all that was left was A Flat Minor.

A rubber band pistol was confiscated from algebra class, because it was a weapon of math disruption.

A sign on the lawn at a drug rehab center said: ‘Keep off the Grass.’

A thief who stole a calendar got twelve months.

A vulture boarded an airplane, carrying two dead raccoons. The stewardess looked at him and said, “I’m sorry, sir, only one carrion allowed per passenger.”

A woman had twins and gave them up for adoption. One of them went to a family in Egypt and was named Ahmal. The other went to a family in Spain; they named him Juan. Years later, Juan sent a picture of himself to his birth mother. Upon receiving the picture, she told her husband that she wished she also had a picture of Ahmal. Her husband responded, “They’re twins! If you’ve seen Juan, you’ve seen Ahmal.”

Becoming a vegetarian is a huge missed steak.

But if we give peas a chance, won’t the lima beans feel left out? (Pinky and the Brain Cartoon)

Cantaloupe tonight – dad’s got the car.

Deja Moo: The feeling that you’ve heard this bull before.

Did you hear about the Buddhist who refused Novocain during a root canal? His goal: transcend dental medication.

Did you hear about the Italian chef with a terminal illness? He pastaway.

Earning money would be fun if it wasn’t so taxing.

eBay is so useless. I tried to look up lighters and all they had was 13,749 matches.

England has no kidney bank, but it does have a Liverpool.

Frog parking only. All others will be toad.

Hanging is too good for a man who makes puns; he should be drawn and quoted. (Fred Allen)

He had a photographic memory which was never developed.

He drove his expensive car into a tree and found out how the Mercedes bends.

Herb gardeners who work extra get thyme and a half.

How did I escape Iraq? Iran.

How does Moses make his tea? Hebrews it.

How do you make antifreeze? Steal her blanket.

How do you make holy water? Boil the hell out of it!

I can only recite 25 letters of the alphabet. I can’t remember why.

I can’t believe I got fired from the calendar factory. All I did was take a day off.

I can’t find my rutabaga. I hope it will turnip.

I changed my iPod’s name to Titanic. It’s syncing now.

I couldn’t quite remember how to throw a boomerang, but eventually it came back to me.

I dropped out of communism class because of lousy Marx.

If there was someone selling drugs in this place, weed know.

I got a job at a bakery because I kneaded dough.

I know a guy who’s addicted to brake fluid. He says he can stop anytime.

I like puns, but not everyone willower their standards and laugh at this type of humour.

I’m reading a book about anti-gravity. I can’t put it down.

If we canteloup lettuce marry!

If you can think of a good fish pun, let minnow.

If you hear it from the horse’s mouth you’re listening to a neigh sayer.

If you jumped off the bridge in Paris, you’d be in Seine.

I’m reading a book about anti-gravity. It’s impossible to put down.

I relish the fact that you’ve mustard the strength to ketchup to me.

I should have been sad when the batteries in my flashlight went dead, but I was delighted.

I stayed up all night to see where the sun went. Then it dawned on me.

Is Betty Crocker a flour child?

I swallowed some food colouring. My doctor says I’m ok, but I feel like I’ve dyed a little on the inside.

I thought I saw an eye doctor on an Alaskan island, but it turned out to be an optical Aleutian.

I thought Santa was going to be late, but he arrived in the Nick of time.

I told my cat I was going to teach him to speak English. He looked at me and said “Me how?”

I tried to catch some fog. I mist.

It is tough to do inventories in Afghanistan because of the tally ban.

It’s a lengthy article on Japanese Sword Fighters but I can Samurais it for you.

It’s better to love a short girl than not a tall.

I used to be a banker but then I lost interest.

I’ve been to the dentist many times so I know the drill.

I will never forget my childhood summers, when we would climb inside old tyres and roll down the hills… They were goodyears.

I wondered why the baseball kept getting bigger. Then it hit me.

I wrote a novel about a fellow who had a small garden. It didn’t have much of a plot.

Let’s all go for coffee. It’ll be a latte of fun.

Lettuce meat olive your eggspectations!
– Sign outside a Subway diner –

Local Area Network in Australia: the LAN down under.

Man jumps in a taxi and says “King Arthur’s Close”. The taxi driver says “Don’t worry, I’ll lose him at the lights.”

Marriage is the mourning after the knot before.

My first job was working in an orange juice factory, but I got canned: couldn’t concentrate.

My tailor is happy to make a new pair of pants for me. Or sew it seams.

My uncle has 65 treason his back yard. (Bob Hope)

“My grandfather came from eastern Europe.” “Russian?” “No, he took his time.”

Need an Ark? I noah guy.

News of a coming flood was leaked.

No matter how much you push the envelope, it’ll still be stationery.

Pasteurize: Too far to see.

People are choosing cremation over traditional burial. It shows that they are thinking out of the box.

Pour hot water down a rabbit hole and you get a hot cross bunny.

She was only a whiskey maker, but he loved her still.

Smaller babies may be delivered by stork but the heavier ones need a crane.

Show me a piano falling down a mineshaft and I’ll show you A-flat minor.

The batteries were given out free of charge.

The best way to stop a charging bull is to take away his credit card.

The comedian stopped at the fabric store on his way to a comedy gig. He was looking for new material.

The fattest knight at King Arthur’s round table was Sir Cumference. He acquired his size from too much pi.

The little old woman who lived in a shoe wasn’t the sole owner – there were strings attached.

The man put his name on the neck of his shirt so he would have collar ID.

The midget fortune teller who escaped from prison was a small medium at large.

The patron saint of poverty is St. Nickeless.

The soldier who survived mustard gas and pepper spray is now a seasoned veteran.

There was a person who sent ten puns to friends, with the hope that at least one of the puns would make them laugh. No pun in ten did.

They told me I had type A blood, but it was a Type-O.

This girl said she knew my from Vegetarian Club, but I’ve never met herbivore.

Those who throw dirt are sure to lose ground.

To write with a broken pencil is pointless.

Two hats were hanging on a hat rack in the hallway. One hat said to the other: ‘You stay here; I’ll go on a head.’

Two hydrogen atoms met. One said, ‘I’ve lost my electron.’ The other said ‘Are you sure?’ The first replied, ‘Yes, I’m positive.’

Two silk worms had a race. They ended up in a tie. 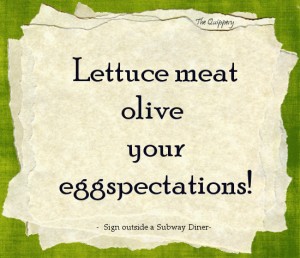 Unknown journalist: “How do you find America?” Ringo Starr: “Turn left at Greenland.”

“We’ll have to rehearse that,” said the undertaker as the coffin fell out of the car.

What did the buffalo say to his son when he left for college? Bison.

What did the pirate say when he turned 80 years old? Aye matey.

What do you call a dinosaur with an extensive vocabulary? A thesaurus.

What do you call people who are afraid of Santa Claus? Claustrophobic.

What do you call an elf who sings? A  wrapper!

What do you call a cat that has swallowed a duck? A duck-filled fatty puss.

What do you have to do to have a party in space? You have to Planet.

When a clock is hungry it goes back four seconds.

When cannibals ate a missionary, they got a taste of religion.

When chemists die, they barium.

When fish are in schools, they sometimes take debate.

When two egotists meet, it’s an I for an I.

When you get a bladder infection, urine trouble.

Where did Noah keep the Bees? In the ark-hives.

Why does Santa Claus go down the chimney on Christmas Eve? Because it soot’s him.

Whoever stole my copy of Microsoft Office is in big trouble. You have my Word.

With her marriage she got a new name and a dress.

Yesterday I accidentally swallowed some food coloring. The doctor says I’m OK, but I feel like I’ve dyed a little inside.

You know prices are rising when you buy a winter jacket and even down is up.

If you can add to this list, please do so in your comments below! Some of these puns were featured in a post called Puns for Educated Minds by the Curmudgeon at Large.