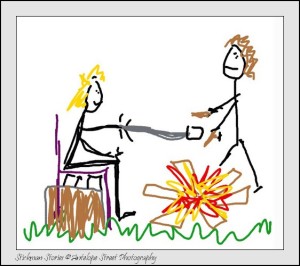 Technique: First, the ideal marshmallow cooking stick must be found, and then whittled to the exact right point. The stick has to be brandished like a sword by a child (or someone who is child like) for a few minutes, until some mom says, “Put that stick down before you poke someones eye out!”

In the meantime, someone has to build a fire. Probably a number of someones – the paper bringers, the match finders, the log splitters, the kindling scroungers. Then there is a discussion of how best to stack the paper, wood and kindling. Once the fire is off and running, the ritual of telling stories, adding more wood, and poking the fire with a big stick, has to take place. When mom says, “Put that big stick down before you burn up the forest!” it is time to get out the marshmallows, and find the very pointy sticks again.

Once a marshmallow is skewered, they are slowly browned until they are golden on the ouside, and drippy goo on the inside. Alternately, the marshmallow can be burned to a crisp in just a few seconds. In addition to the Marshmallow Cookers, there is the Keeper of the Graham Wafers and Chocolate. This person will line up the graham wafer squares on a suitable surface. Alternate wafers will have a square of chocolate or a smear of Nutella put on it.

The Marshmallow Cooker presents the cooked marshmallow to the Keeper of the Graham Wafers, who will try to sandwich the marshmallow between two wafers without burning their fingers. (This ‘recipe’ for Traditional S’Mores is dedicated to the 305 families of Hidden Valley, Alberta who lost their community (and all their campfire rings) in the Floods of 2013.)

There are other simpler ways to make S’mores, of course. If you have a gas stove and a long handled fork, you are half way there! You can cook wieners that way too, though your mom may not like you doing that any more than my mom did when I was a kid. 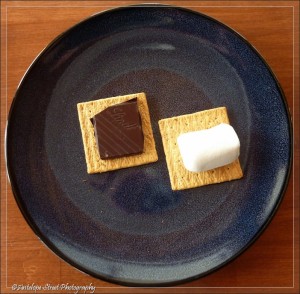 Watch the chocolate too. You don’t want it to melt and run all over the place. Remove and make your chocolate marshmallow sandwich. Let it cool before eating. Each S’more will have about zmfxn calories and nbxz fat, sodium and sugar – but they are worth it.

Seize the moment. Remember all those women on the Titanic who waved off the dessert cart.
-Erma Bombeck –

What are your S’More memories?

27 thoughts on “iPad Draw Something! How to Make S’Mores – Traditional and Super Simple”