It has been a busy summer in the mixed Aspen/Willow/Spruce forest of our acreage community north of Calgary, Alberta. In our section of the forest alone, the Great Horned Owl, Magpie, and Crow have all nested and produced young. The ‘new bird in town’, though was the Cooper’s Hawk. I encountered this one when I was walking along the edge of a grove of Aspen on July 23rd.

It flew from tree to tree in a large circle, scolding me as it flew. Another bird was chirping at the hawk (which is what had attracted me to that corner of our property in the first place.)

On July 31, I saw the Cooper’s Hawk fledgling. 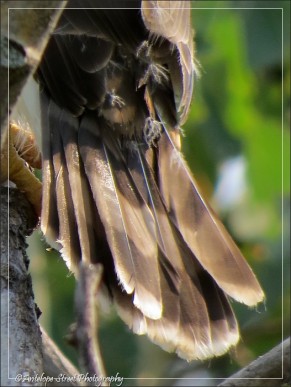 What a mixture of disheveled youth and fierce raptor! Bits of fluffy down still poke out from under serious feathers – the beak and talons are the tools of a soon to be deadly predator.

On August 11th, a juvenile Cooper’s Hawk landed on the fence at the back of the property. A few hours later, I found a juvenile in the Aspen woods. I’m assuming this is the same bird as the fledgling in the previous photos.

Note the yellow eyes and the brown ‘drips’ or tear-drops on the white chest and abdomen.

The Feather Files
Name: Cooper’s Hawk
Species: Accipiter cooperii
Native to and Migration: The Cooper’s hawk is a short to medium-distance migrant. They summer and breed in southern Canada, and throughout most of the United States. They winter in the southern US, with some birds migrating as far south as Mexico and Honduras.
Date Seen: July to August, 2017
Location: A half hour (in car riding time) north east of Calgary, Alberta.

Their hunting style is dangerous – studies found that many of these hawks had healed fractures in the bones of the chest.