Eldest daughter and her family have been staying with us, on and off, for the past month.  This has not created any space continuum inconvenience to The Car Guy and I – The Red House is more than large enough (because it is the same house we raised a squabble of teens in). Two extra adults and two teenagers  – we left it to them to jostle for prime real estate to set up their internet command stations.

Our kitchen is spacious. It is more than capable of handling the extra cooks. The biggest difference was that the fridge filled and emptied on a daily, rather than weekly basis. Oh, and the dishwasher was often pressed into service twice a day.

But the workhorse, no, the single most essential appliance in the house, was the Coffee Machine. These people are fueled by liquid caffeine.

This coffee falls into your stomach, and straightway there is a general commotion… From that moment on, everything becomes agitated. Ideas quick-march into motion like battalions of a grand army to its legendary fighting ground, and the battle rages. Memories charge in, bright flags on high; the cavalry of metaphor deploys with a magnificent gallop; the artillery of logic rushes up with clattering wagons and cartridges; on imagination’s orders, sharpshooters sight and fire; forms and shapes and characters rear up; the paper is spread with ink – for the nightly labor begins and ends with torrents of this black water, as a battle opens and concludes with black powder.
– Honoré de Balzac, The Pleasures and Pains of Coffee –

Yesterday morning, The Car Guy and a very full Jeep transported the Daughter and her family to the airport to catch the first flight of many. They are starting a ten month, round the world adventure.

This morning it is eerily quiet and cold here at The Red House. The Coffee Machine hasn’t even been turned on, so after I photographed it I added the message I expect it would want to send to the coffee drinkers who have left it behind. 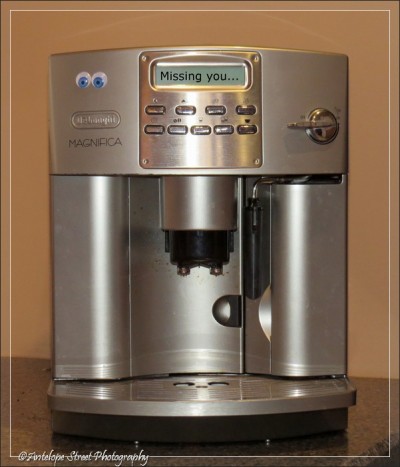 The fridge door has only opened twice. The stack of dishes on the counter is hardly noticeable. The bathrooms are unoccupied – there is no water running. There are no voices chatting, no tap, tap, tap on multiple keyboards.

The weather has suddenly turned, and after months of dry heat, it is raining. Yesterday it was still summer. Today it is fall.

Missing the family, but life goes on…
Looking on the bright side, the Internet is a lot faster now that only two of us are connected…