Great Horned Owls have nested in a spruce tree in our front yard. 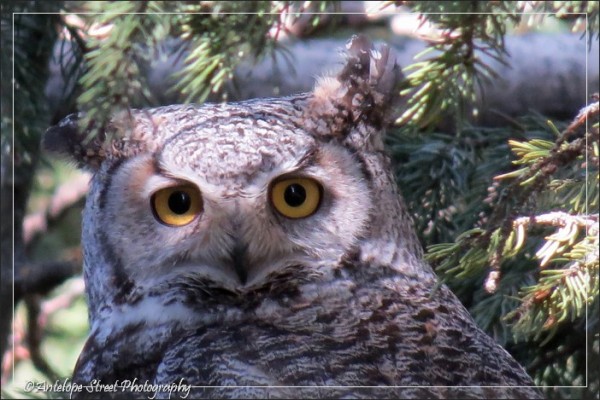 The first hint I had that it was a nest site was when I saw the adult owl land on a branch, then walk along the branch into the middle of the tree.

The first baby owl (owlet) ventured out of the nest and onto a branch on May 27. It spent most of the day sitting with the adult. 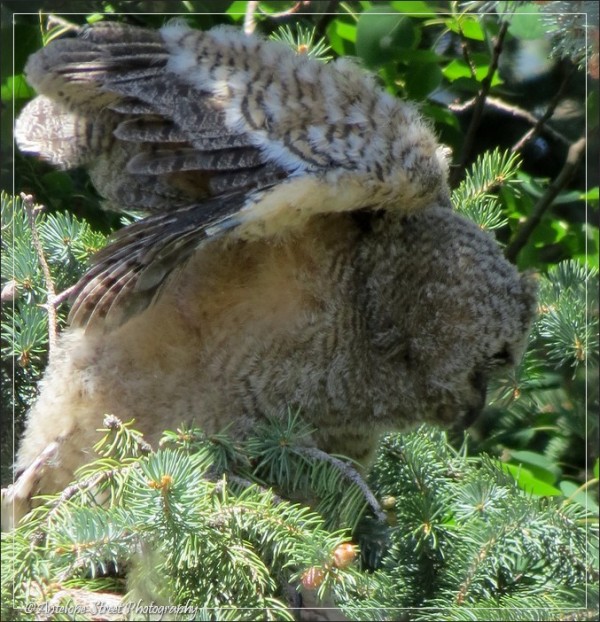 …bobbing around and exercising its wings.

Checking out its talons… 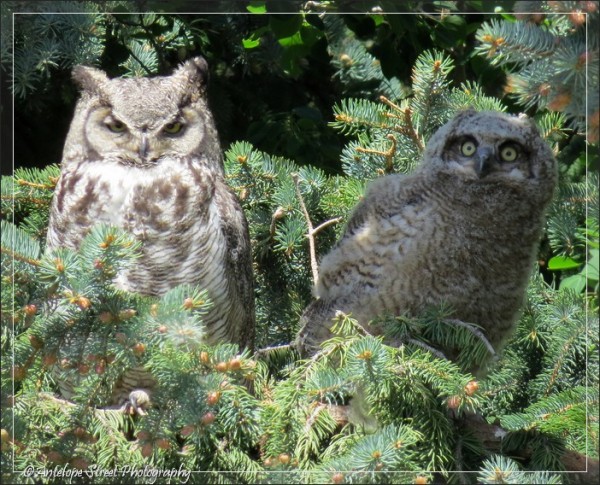 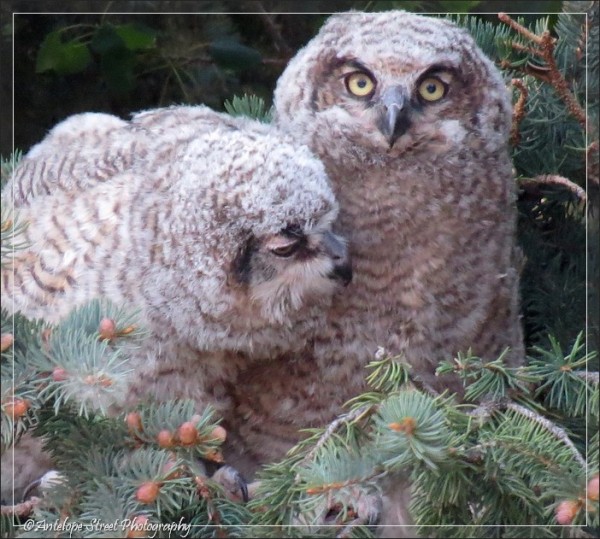 By supper time, a second owlet emerged and sat on the branch next to the first one.

On the morning of May 28, all three babies had emerged from the nest and ‘branched’.

Owlet on the right: “This is how you do wing exercises.”
Owlet in the centre: “Duck!”
Owlet on the left: “Duck! I don’t see any ducks.”

Bedtime – the owlet on the right walked back to the nest. 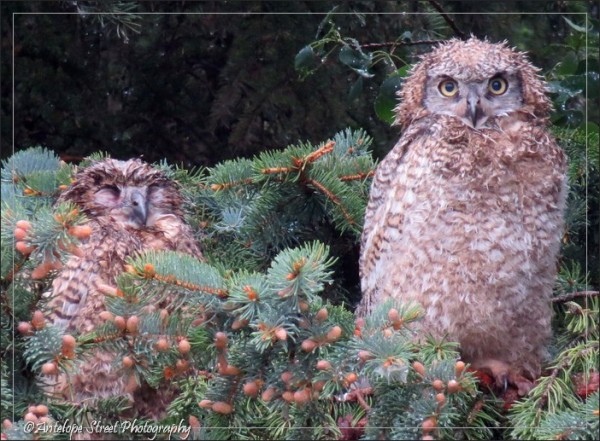 June 1 – Two of the owlets sitting in the rain.

Color: In Alberta, neck and back are speckled light brown, streaked and barred with black and white. The undersides are a light colour and heavily barred. The throat is white.

Habitat: It seldom moves far from its place of birth and can be found in most forested and semi-forested regions in North America. The Great Horned Owl does not migrate.

Nesting: They take possession of the previous year’s nest of some other raptor or that of a crow or magpie and lay one to five eggs in late winter. The eggs are incubated for about 30 to 37 days. Young owls are almost fully feathered and capable of short flights at eight weeks of age. In central Alberta (latitude 54°), average hatching dates range from mid-April to early May. The same nest is seldom used for more than one year – the young have usually destroyed the nest by the time they leave it.

Eyes and hearing: The owls have excellent night vision. Their eyes don’t move in their sockets, but they can swivel their heads more than 180 degrees. They have sensitive hearing.

Feathers: 8 days after birth, the downy plumage is replaced by immature plumage. Flight feathers in the wings and tail begin to appear.
– At 2 weeks, they have more than 50 percent of their juvenile plumage.
– At 3 weeks, ear-tufts show as small compact patches.
– At 11 weeks, the facial disc and white bib are well defined.
– At 21 weeks, they are a mottled buff colour.
– At 26 weeks, ear tufts are fully grown.

Feeding: The male brings all the food to the nest until the female finishes brooding the chicks. The female stays with the young and hunts only when food provided by the male is insufficient.

Leaving the nest: By day 40 (about 6 weeks of age) the young are able to climb well, can leave the nest and clamber out along a tree branch. This stage is known as branching.
– By day 45-49 (7 weeks) : The young are fully feathered and capable of flight. They are able to make three to four short flights a day.
– After leaving the nest, the fledglings stay together for several weeks and they may roost together in a nearby tree. The adults will probably roost away from the young, but continue to feed them if needed, even into September.