A Little Bit About Ants 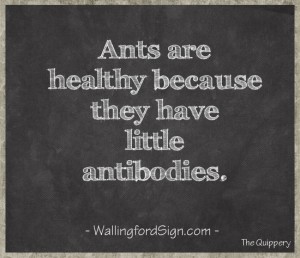 I bought an ant farm. I don’t know where I am going to get a tractor that small!
– Steven Wright –

Virtue signalling: when you express an opinion in public to show your moral superiority and gain approval – without actually taking a significant action.

(Isaac) Newton wouldn’t last long as a ‘public intellectual’ in modern American culture. Sooner or later, he would say ‘offensive’ things that get reported to Harvard and that get picked up by mainstream media as moral-outrage clickbait. His eccentric, ornery awkwardness would lead to swift expulsion from academia, social media, and publishing. Result? On the upside, he’d drive some traffic through Huffpost, Buzzfeed, and Jezebel, and people would have a fresh controversy to virtue-signal about on Facebook. On the downside, we wouldn’t have Newton’s Laws of Motion.
― Geoffrey Miller –

Gender neutrality is a hot issue is Canada right now. One line of our National Anthem has been changed from “in all thy sons command” to “in all of us command.” (To be honest, I haven’t been able to sing our entire National Anthem since the unofficial English/French version became the ‘right’ way to sing it.)

Prime Minister Trudeau, at a recent Town Hall meeting, corrected a young woman who spoke about the “the future of mankind.” Trudeau interrupted her and said, “ we like to say people-kind, not necessarily mankind.” (Days later, he claimed he was just joking.)

CBC Comedy (part of a federally funded Canadian Crown Corporation) isn’t all that funny sometimes. A recent post started off: “Air Canada announced this morning that as of 2017, passengers will be required to pay an extra fee to transport any emotional baggage they happen to be carrying with them onto their flight.”

While that is a funny line, the post goes on to condemn men in general: “When it comes to homophobia, misogyny, and deep-seated racism, we’ll be charging $500 per issue … the airline made the decision to introduce the fee last week after nine different businessmen on nine different flights loudly refused to turn off their electronic devices during takeoff and then proceeded to get blind drunk on tiny bottles of vodka and yell racial slurs at the person in the seat beside them.”

Give a person a fish and you feed them for a day; teach that person to use the Internet and they won’t bother you for weeks.
– Author Unknown –

Do you remember when you connected to the Internet by dial-up? It could take minutes, if not hours, to load web pages onto a computer! The majority of internet users today would be frustrated by the lack of speed, yet for many people in the world, a phone line, and the relatively low cost of dial-up, is either their preferred, or necessitated method of connecting.

Factors that affect the speed:
Your computer (and any other equipment that connects it to the internet); interference or conflicts from other equipment (depending on your set-up.)
Your Service Provider – In addition to Dial-up, you can connect to the internet by Broadband (cable, DSL), Satellite or Wireless Tower. Each provider will have varying levels of service with faster Internet service billed at a premium. Independent of what you level of service you are paying for, the number of people trying to access the service provider can slow things down. (Our service is also dependent on weather, tower outages and a misaligned receiver dish!)
Internet Traffic – Access to any site will depend on the amount of traffic that is trying to access it.

Would you rather the world be warmer or cooler?

We have one of the big glacier rocks (an erratic) near us, so this Climate Change joke seems pretty funny…

A New Yorker visits Vermont and asks, “Where did all these rocks come from?” And the farmer says, “They were brought here by a glacier.”
“Well, what happened to the glacier?”
And the farmer replies, “It went back for more rocks.”
– Blacklock’s Reporter –

Personally, I prefer a warmer Canada – we are one of the coldest countries in the world. We are the 2nd largest country by land mass with .49% of the world population spread out across our entire width. We consume about .6% of the world food production, but we produce and export 1.5%. We emit only 1.69% of Global Greenhouse Gas Emissions.

A Joke about Government Being Out of Touch

A cowboy named Billy was overseeing his herd in a remote pasture in southern Alberta, when suddenly a brand-new BMW advanced toward him out of a cloud of dust. The driver, a young man in a Brioni® suit, Gucci® shoes, RayBan® sunglasses and YSL® tie, leaned out the window and asked the cowboy, “If I tell you exactly how many cows and calves you have in your herd, will you give me a calf?”

Billy looked at the man, who obviously is a yuppie, then looked at his peacefully grazing herd and calmly answered, “Sure, why not?”

The yuppie parked his car, whiped out his Dell® notebook computer, connected it to his Cingular RAZR V3® cell phone, and surfed to a NASA page on the Internet, where he called up a GPS satellite to get an exact fix on his location which he then fed to another NASA satellite that scaned the area in an ultra-high-resolution photo. The young man then opened the digital photo in Adobe Photoshop® and exported it to an image processing facility in Hamburg, Germany .

Within seconds, he receiveed an email on his Palm Pilot® that the image had been processed and the data stored. He then accesseed an MS-SQL® database through an ODBC connected Excel® spreadsheet with email on his Blackberry® and, after a few minutes, receiveed a response. Finally, he printed out a full-color, 150-page report on his hi-tech, miniaturized HP LaserJet® printer, turned to the cowboy and said, “You have exactly 1,586 cows and calves.”

“That’s right. Well, I guess you can take one of my calves,” says Billy. He watcheed the young man select one of the animals and looked on with amusement as he stuffed it into the trunk of his car. Then Billy called to him, “Hey, if I can tell you exactly what your business is, will you give me back my calf?”

The young man thought  about it for a second and then said, “Okay, why not?”

“Wow! That’s correct,” said the yuppie, “but how did you guess that?”

“No guessing required.” answered the cowboy. “You showed up here even though nobody called you; you want to get paid for an answer I already knew, to a question I never asked. You used millions of dollars worth of equipment trying to show me how much smarter than me you are; and you don’t know a thing about how working people make a living – or about cows, for that matter. This is a flock of sheep. Now give me back my dog.
– OLL –

The rain it raineth on the just
And also on the unjust fella;
But chiefly on the just, because
The unjust’s stolen his umbrella
– Charles Bowen