I’ve taken three Gourd Art classes from a talented artist,  Margaret Sullivan of Rio Verde, Arizona.  In two of the classes we used very large gourds that we stained with leather dyes before we launched into the time consuming technique called ‘Wonkey Weaving’. The bare bones of the weaving is done with reeds soaked in water to make them pliable. The wonkey meant you were supposed to leave lots of odd shaped gaps to fill in later with wool or other pliable materials.

My first gourd had not become very ‘wonkey’ at all by the end of the class. I took it home and completed the rest of the weaving and added purchased feathers and beads. 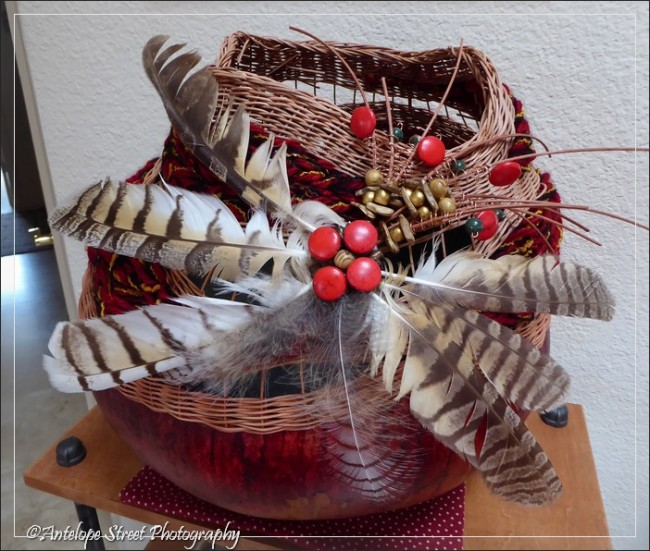 At the second class, I achieved wonkey.

In the third class, we made a Totem Pole  from small gourds. We stained the gourds, etched them with a dremel, then decorated them with feathers, beads and paint.

Back in Canada, I could add feathers that I had collected from the grounds around our house. (In Alberta, it is legal to pick up feathers off the ground. It is not legal to do that in the United States, according to the American Migratory Bird Treaty Act.)

American Migratory Bird Treaty Act Reform – There is movement towards decriminalizing accidental bird killings. Federal Judge Edith H. Jones observed that the MBTA prohibits all acts or omissions that “directly” kill birds, but she also said that where these bird deaths are “foreseeable,” as is the case for all owners of big windows, communication towers, wind turbines, solar energy farms, cars, cats, and even church steeples, it seems unreasonable that these people or businesses should continue to be found guilty of violating the MBTA.

There are so many criminal and regulatory laws and regulations that no one can count them. It is estimated that the average citizen breaks 3 laws a day without even knowing it! Can you think what any of them might be!?