It snowed here again. I think this is the 4th time since early September that The Car Guy has had to plow the drive way. I wield the shovel – I am the Cleaner of the Walks and Photographer of the Event. Snow is often an event, especially if there is lots of it and more especially if I find a Red Couch in the yard.

Canadian news outlets report snowfall in centimetres (1 inch is 2.54 cm), but like many older Canadians, I was raised with the Imperial system of measurements. Though I am ‘measurement bilingual’, my Snow still falls in inches. It snowed about 6 inches, but hardly any snow fell on the Red Couch.

Canada began metrifying in 1970 because we were expanding trading relationships. Our government decided it should adopt a more universal language of measurements. Some of our Imperial measurements (the capacity units) didn’t even match the Imperial system of the United States. We ‘went metric’ in increments from 1970 to 1980.

Many Canadians still work in Imperial for many things. They measure their height in feet and inches and their weight in pounds. Our ovens measure temperature in fahrenheit degrees. We measure the size of our homes in square feet and the distance to the rural neighbours house in miles because our land was surveyed in miles and our roads were built on those grids. We measure the elusive Red Couch in inches, of course. 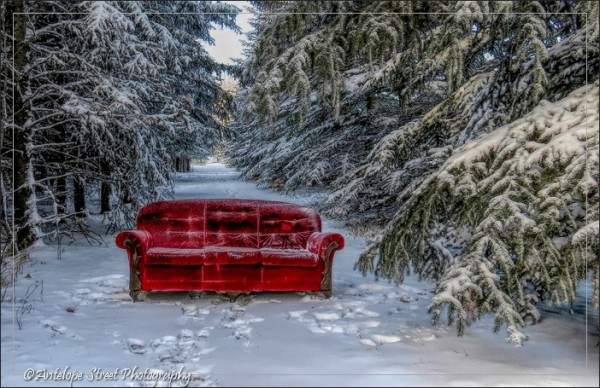 The elusive ‘Red Couch’ is seldom seen on our property, and unknown in just about any other location in the entire world. I found it sitting in the clearing near the front of our property. It was resting, and made no attempt to flee as I approached. Clearly it had arrived after the snow fall. It was only lightly dusted with snowflakes.

Would you call it a couch? Or would you say it is a sofa or a chesterfield? I believe a Red Couch is quite rare but maybe you often see couches of a different color, maybe a bland beige or drab brown, on your street or alley. What say you?

If you want to see the Red Couch in action, hop over to Jenifer Sander Photography. You’ll also see a Reindeer and if you scroll down far enough, you will see The Car Guy and I!