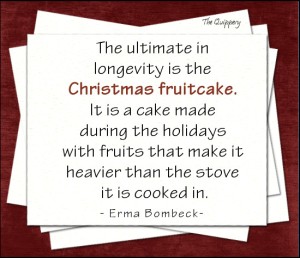 Have you ever thought what it must be like to be a Fruit Cake? Made weeks or months in advance of Christmas Dinner, it is left to steep in whatever secret ingredient is used to give it that special flavour (I prefer rum). It is briefly admired as it is paraded down the catwalk of the dessert tray – then ignored by a bunch of carnivores who have just devoured half of a gigantic turkey.

I’ve always liked Fruit Cake. Back in the days when I’d do lots of Christmas baking, I’d serve it with Rum Hard Sauce. It is a simple recipe. Beat 3-4 tablespoons of butter (though my recipe says margarine because back then it was much cheaper than butter.) Add 1 cup of icing sugar, 1/4 cup rum, and 1/8 cup milk. Beat and chill before serving.

In a 1983 New York Times column titled “Fruitcake Is Forever,” Russell Baker claimed to be in possession of a fruitcake that a long-dead relative had baked in 1794 as a Christmas gift for President George Washington. Washington allegedly sent it back with a note explaining that it was “unseemly for Presidents to accept gifts weighing more than 80 pounds, even though they were only eight inches in diameter.
– Mental Floss –

The Fruit Cake’s nemesis is the Sugar Cookie sitting next to it on the platter. The Sugar Cookie, made just that morning, is unaware that it will be the hands down favourite. It may or may not have been tarted up with icing and silver sprinkles – but it will be devoured. Every last crumb will be gone by the time the last guest has headed  home with a tupperware container full of turkey and mashed potatoes. The Fruit Cake will sit untouched and forlorn on the platter – much to the delight of the hostess who created it (and loves any dessert that contains booze or chocolate or fruit or all three.) It is just a matter of time, however, before the last of the Fruit Cake is also devoured (as is the eggnog) and the hostess – well, she has gained five pounds in weight. (I speak from experience.)

Baking and decorating Gingerbread is a tradition in our family. I’ve written about this in the past (Line up the Usual Suspects and How to Plan a Gingerbread Party.)

Rum Ball making has become one of my son-in-law’s traditions. Each year he tries to increase the amount of rum, yet maintain the consistency of the dough such that it can be rolled into balls. Needless to say, Rum Balls are for adults only. Rum Ball rolling is time consuming and is usually done in front of the TV set while watching a movie. In years gone by, the traditional movie for the job was Amadeas. Don’t ask me why it has to be that movie – it is just the right movie for the job.

My eldest daughter decided to introduce Rum Ball making to her family this year. Her post began

Turns out, twenty-two years is enough time to forget a recipe. Although, as I stood in the grocery store calling my younger sister (wife of the rum ball making son-in-law) to find out what almond paste was, it occurred to me that I might not have actually made this recipe before. I did participate in the ritual of drinking wine, watching a movie and rolling. I’m just not sure I ever assembled the ingredients and then mixed them up in such a huge bowl.

Huh? Carrot Cake doesn’t seem like a traditional Christmas dessert – but it is just about my favourite treat other than something made with dark chocolate. We have done extensive testing of store bought carrot cake and the Fountain Hills AZ Safeway store makes a carrot cake to die for! Since it is just going to be two of us for Christmas dinner this year, quick and simple Safeway carrot cake is the way to go!

What are your traditional Christmas Desserts?