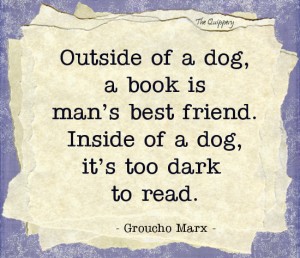 A dog teaches a boy fidelity, perseverance, and to turn around three times before lying down.
– Robert Benchley –

A well-trained dog will make no attempt to share your lunch. He will just make you feel so guilty that you cannot enjoy it.
– Helen Thomson –

By and large, people who enjoy teaching animals to roll over will find themselves happier with a dog.
– Barbara Holland –

Does the name Pavlov ring a bell?
– Author Unknown –

Dog – a kind of additional or subsidiary Deity designed to catch the overflow and surplus of the world’s worship.
– Ambrose Bierce –

Dogs teach us a very important lesson in life: The mail man is not to be trusted.
– Sian Ford –

Every boy who has a dog should also have a mother, so the dog can be fed regularly.
– Anonymous –

From the dog’s point of view, his master is an elongated and abnormally cunning dog.
– Mabel Louise Robinson –

If you get to thinking you’re a person of some influence, try ordering somebody elses dog around.
– Will Rogers –

If you think dogs can’t count, try putting three dog biscuits in your pocket and then giving Fido only two of them.
– Phil Pastoret –

If your dog doesn’t like someone you probably shouldn’t either.
– Unknown –

In order to keep a true perspective of one’s importance, everyone should have a dog that will worship him and a cat that will ignore him.
– Dereke Bruce –

It’s all fun and games until someone ends up in a cone.
– Sign at an Animal Hospital –

I wonder what goes through his mind when he sees us peeing in his water bowl.
– Penny Ward Moser –

My dog is worried about the economy because Alpo is up to 99 cents a can. That’s almost $7.00 in dog money.
– Joe Weinstein –

My dog was my soul mate; we both took naps, we both skipped lunch, we both hated the vacuum…
— Elayne Boosler –

No one appreciates the very special genius of your conversation as much as the dog does.
– Christopher Morley –

The difference between dogs and cats is that dogs come when they’re called. Cats take a message and get back to you.
– James Dent –

They say a reasonable amount o’ fleas is good fer a dog – keeps him from broodin’ over bein’ a dog, mebbe.
– Edward Noyes Westcott –

They say the dog is man’s best friend. I don’t believe that. How many of your friends have you neutered…
– Larry Reeb –

Unattended children will be given an espresso and a free puppy.
– Sign at a Veterinary Hospital –

We’ve begun to long for the pitter-patter of little feet, so we bought a dog. It’s cheaper, and you get more feet.
– Rita Rudner –

When did I look at a new puppy and see only puddles instead of something to love that would love me back?
– Erma Bombeck –

When picking a pet, keep in mind that to a dog, you’re family; to a cat, you’re staff.
– Ron Dentinger –

What do you call a dog magician? A labracadabrador.
– Sign at a Veterinary Clinic –

You can say any foolish thing to a dog, and the dog will give you a look that says, “My God, you’re right! I never would’ve thought of that!”
– Dave Barry –

You can teach an old dog new tricks with the right kind of doggie treats.
– Cynthia Copeland Lewis –

Here’s why I will be a good person. Because I listen. I cannot talk, so I listen very well. I never deflect the course of the conversation with a comment of my own… For instance, if we met at a party and I wanted to tell you a story about the time I needed to get a soccer ball in my neighbor’s yard but his dog chased me and I had to jump into a swimming pool to escape, and I began telling the story, you, hearing the words “soccer” and “neighbor” in the same sentence, might interrupt and mention that your childhood neighbor was Pele, the famous soccer player, and I might be courteous and say, Didn’t he play for the Cosmos of New York? Did you grow up in New York? And you might reply that, no, you grew up in Brazil on the streets of Tres Coracoes with Pele, and I might say, I thought you were from Tennessee, and you might say not originally, and then go on to outline your genealogy at length. So my initial conversational gambit – that I had a funny story about being chased by my neighbor’s dog – would be totally lost, and only because you had to tell me all about Pele. Learn to listen! I beg of you. Pretend you are a dog like me and listen to other people rather than steal their stories.
― Enzo the Dog in ‘The Art of Racing in the Rain’ by Garth Stein –