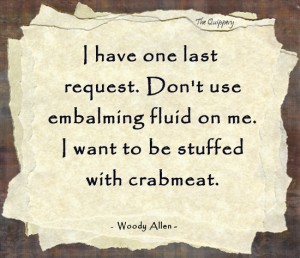 According to most studies, people’s number one fear is public speaking. Number two is death. Death is number two! Does that sound right? This means to the average person, if you go to a funeral, you’re better off in the casket than doing the eulogy.
– Jerry Seinfeld –

Amazing tradition. They throw a great party for you on the one day they know you can’t come.
– Michael Gold (Jeff Goldblum), The Big Chill (1983) –

Being president is like running a cemetery: you’ve got a lot of people under you and nobody’s listening.
– William J. Clinton –

Cemetery: (n) A marble orchard not to be taken for granite.
– Author Unknown –

Don’t carry me off in a brass-handled coffin
With a wreath on my chest I won’t be ‘at rest’
There’s nothing much worse than a ride in a hearse
To a hole in the ground with just strangers around
No! bury me deep in the compost heap
Or pop me right under a nice floribunda
Its really much wiser to become fertiliser
Then I can grow roses as I decomposes.
– Joye Fothergill –

For as much as I hate the cemetery, I’ve been grateful it’s here, too. I miss my wife. It’s easier to miss her at a cemetery, where she’s never been anything but dead, than to miss her in all the places where she was alive.
― John Scalzi, Old Man’s War –

Here lies the father of 29.
He would have had more
But he didn’t have time.
– Author Unknown –

No matter how rich you become, how famous or powerful, when you die the size of your funeral will still pretty much depend on the weather.
– Michael Pritchard –

Some hang above the tombs,
Some weep in empty rooms,
I, when the iris blooms,
Remember.
– Mary Coleridge –

The gravestones are like rows of books bearing the names of those whose names have been blotted from the pages of life; who have been forgotten elsewhere but are remembered here.
― Dean Koontz, Fear Nothing –

The wrought iron ones are holding their shape, but the wooden ones have begun to lean, often as a unit, as if a meeting had been held and the angle of lean agreed upon for the year.
– Nancy Millar, Remember Me As You Pass By Stories from Prairie Graveyards –

They say such nice things about people at their funerals that it makes me sad to realize that I’m going to miss mine by just a few days.
– Garrison Keillor –

As for a future life, every man must judge for himself between conflicting vague probabilities.
– Charles Darwin –

Death is a low chemical trick played on everybody except sequoia trees.
– J.J. Furnas –

Death is natures’ way of saying, “Your table is ready.”
– Robin Williams –

Death – when your body sets your spirit free.
– Author Unknown –

Did you hear about the plane that crashed in the cemetery? Search and rescue workers have recovered 100 bodies and expect that number to climb as digging continues.
– Author Unknown –

DIED From not forwarding that text message to 10 people.
– Suggested Headstone inscription –

During a coffee break: “There must be something to reincarnation. It’s hard to believe that I could get this far behind in one lifetime.”
– Robert Orben –

Dying is a very dull, dreary affair. And my advice to you is to have nothing whatever to do with it.
– Somerset Maugham –

Even very young children need to be informed about dying. Explain the concept of death very carefully to your child. This will make threatening him with it much more effective.
– P.J. O’Rourke –

For three days after death, hair and fingernails continue to grow but phone calls taper off.
– Johnny Carson –

How important does a person have to be before they are considered assassinated instead of just murdered?
– Author Unknown –

I am ready to meet my Maker. Whether my Maker is prepared for the ordeal of meeting me is another matter.
– Sir Winston Churchill –

I don’t believe in an afterlife, although I am bringing a change of underwear.
– Woody Allen –

I don’t mind dying, the trouble is you feel so bloody stiff the next day.
– George Axlerod –

If I die, who’s going to take care of my shadow? Or will it return to the night, from whence it came? While I sleep at night I keep my shadow folded neatly in my underwear drawer.
― Jarod Kintz –

I have considered all this, however, and it occurs to me that Dan, as admirable as he was in many ways, is not a good model for me. Dan’s dead.
– John Robert McFarland –

I have lost friends, some by death … others through sheer inability to cross the street.
– Virginia Woolf –

I have one last request. Don’t use embalming fluid on me. I want to be stuffed with crabmeat.
– Woody Allen –

In India when a man dies, his widow throws herself on the funeral pyre. Over here, she says, “Fifty ham baps, Beryl – you slice, I’ll butter.”
– Victoria Wood –

It is a good day to die.
– Sitting Bulls Warriors –

It’s not that I’m afraid to die, I just don’t want to be there when it happens.
– Woody Allen –

My mother said, “You’re not going to die.”
Did you believe her?
“Hey, when my mother says something you don’t dare question it.”
– Erma Bombeck –

One dies only once, and it’s for such a long time!
– J.B. Moliere Poquelin –

The man who invented autocorrect has died. Restaurant in piece.
– Author Unknown –

There are worse things in life than death. Have you ever spent an evening with an insurance salesman?
– Woody Allen –

To lose one parent, Mr. Worthing, may be regarded as a misfortune; to lose both looks like carelessness.
– Oscar Wilde –

What are a redneck’s last words? “Hey, y’all, watch this!”
– Author Unknown –