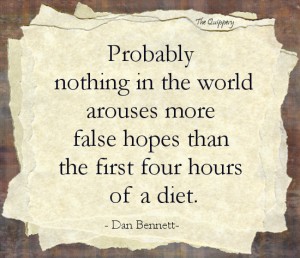 All the things I really like to do are either immoral, illegal or fattening.
– Alexander Woodcott –

Amazing. You hang something in your closet for a while and it shrinks two sizes.
– Author Unknown –

I am in shape. Round is a shape.
– Author Unknown –

I asked the clothing store clerk if she had anything to make me look thinner, and she said, “How about a week in Bangladesh?”
– Roseanne Barr –

I figured out Victoria’s secret. Starvation and liposuction.
– Mel Fine –

If nature had intended our skeletons to be visible it would have put them on the outside of our bodies.
– Elmer Rice –

I keep trying to lose weight but it keeps finding me.
– Author Unknown –

I’m fat, but I’m thin inside. Has it ever struck you that there’s a thin man inside every fat man, just as they say there’s a statue inside every block of stone.
– George Orwell –

Inside some of us is a thin person struggling to get out, but they can usually be sedated with a few pieces of chocolate cake.
– Author Unknown –

I really don’t think I need buns of steel. I’d be happy with buns of cinnamon.
– Ellen DeGeneres –

Is ‘fat’ really the worst thing a human being can be? Is ‘fat’ worse than ‘vindictive’, ‘jealous’, ‘shallow’, ‘vain’, ‘boring’ or ‘cruel’? Not to me.
I’ve got two daughters who will have to make their way in this skinny-obsessed world, and it worries me, because I don’t want them to be empty-headed, self-obsessed, emaciated clones; I’d rather they were independent, interesting, idealistic, kind, opinionated, original, funny – a thousand things, before ‘thin’. And frankly, I’d rather they didn’t give a gust of stinking chihuahua flatulence whether the woman standing next to them has fleshier knees than they do. Let my girls be Hermiones, rather than Pansy Parkinsons. Let them never be Stupid Girls.
– J.K. Rowling –

I put on the fat suit and went outside and walked around. I was really nervous about being found out, but nobody would even make eye contact with me. It really upset me.
We feel it’s unacceptable to be fat, when it has nothing to do with who the person actually is.
– Gwyneth Paltrow –

I’ve been on a constant diet for the last two decades. I’ve lost a total of 789 pounds. By all accounts, I should be hanging from a charm bracelet.
– Erma Bombeck –

I’ve been on a diet for two weeks and all I’ve lost is fourteen days.
– Totie Fields –

My body knows what I shouldn’t eat – but usually doesn’t tell me until after I’ve eaten it.
– Ashleigh Brilliant –

Probably nothing in the world arouses more false hopes than the first four hours of a diet.
– Dan Bennett –

Reality is the woman who got out of your bed this morning and recognized that the figure in the mirror may never be rated a perfect 10 or even a size 10.
– Jan Larkey –

Self-delusion is pulling in your stomach when you step on the scales.
– Paul Sweeney –

Skinny people irritate me! Especially when they say things like, “You know, sometimes I just forget to eat.” Now I’ve forgotten my address, my mother’s maiden name, and my keys. But I’ve never forgotten to eat.
– Author Unknown –

The biggest seller is cookbooks and the second is diet books — how not to eat what you’ve just learned how to cook.
– Andy Rooney –

The lunches of fifty-seven years had caused his chest to slip down into the mezzanine floor.
– P.G. Wodehouse –

This morning, in 1976, Stephanie (Fats) Stumflug found she had granolaed herself right out of her caftan. Couldn’t pry it on with a shoehorn. The trouble – she explained to anyone who would listen – was that the side of the granola box said only 125 calories per ounce, but the pretty picture showed a generous bowlful… actually about 5 ounces, if she’d ever weighed a generous bowlful, but she never did. “I might have known,” she said bitterly. “You can’t trust anything that tastes good.”
– Peg Bracken –

Time, obviously, is relative. Two weeks on a vacation is not the same as two weeks on a diet.
– Author Unknown –

Unnecessary dieting is because everything from television to fashion ads has made it seem wicked to cast a shadow. This wild emaciated look appeals to some women, though not to many men, who are seldom seen pinning up a Vogue illustration in a machine shop.
– Peg Bracken –