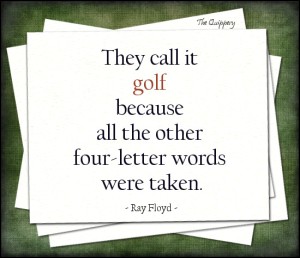 An interesting thing about golf is that no matter how badly you play; it is always possible to get worse.
– Author Unknown –

Anyone caught collecting golf balls will have their balls removed.
– Sign somewhere –

Columbus went around the world in 1492. That isn’t a lot of strokes when you consider the course.
– Lee Trevino –

Duffers who consistently shank their balls are urged to buy and study ‘Shanks – No Thanks’ by R.K. Hoffman, or in extreme cases, M.S. Howard’s excellent ‘Tennis for Beginners’.
– Henry Beard –

Golf can best be defined as an endless series of tragedies obscured by the occasional miracle, followed by a good bottle of beer.
– Author Unknown –

Golf is a game where white men can dress up as black pimps and get away with it.
– Robin Williams –

Golf is a game in which you yell “fore,” shoot six, and write down five.
– Paul Harvey –

Golf is a game whose aim is to hit a very small ball into an ever smaller hole, with weapons singularly ill-designed for the purpose
– Winston Churchill –

Golf is a lot like taxes – you drive hard to get to the green and end up in the hole.
– Author Unknown –

Golf is the most fun you can have without taking your clothes off.
– Chi Chi Rodriguez –

Golf’s a hard game to figure. One day you’ll go out and slice it and shank it, hit into all the traps and miss every green. The next day you go out and for no reason at all you really stink.
– Bob Hope –

His driving is unbelievable. I don’t go that far on my holidays.
– Ian Baker-Finch, on John Daly –

I can airmail the golf ball, but sometimes I don’t put the right address on it.
– Jim Dent –

If you are caught on a golf course during a storm and are afraid of lightning, hold up a 1-iron. Not even God can hit a 1-iron.
– Lee Trevino –

If you really want to get better at golf, go back and take it up at a much earlier age.
– Tom Mulligan –

I’ll always remember the day I broke ninety. I had a few beers in the clubhouse and was so excited I forgot to play the back nine.
– Bruce Lansky –

I’m in the woods so much I can tell you which plants are edible.
– Lee Trevino –

I’m not saying my golf game went bad, but if I grew tomatoes, they’d come up sliced.
– Lee Trevino –

It’s so ridiculous to see a golfer with a one foot putt and everybody is saying “Shhh” and not moving a muscle. Then we allow nineteen year-old kids to face a game-deciding free throw with seventeen thousand people yelling.
– Al McGuire –

It took me seventeen years to get three thousand hits in baseball. I did it in one afternoon on the golf course.
– Hank Aaron –

I’ve been playing the game so long that my handicap is in Roman numerals.
– Bob Hope –

I was three over. One over a house, one over a patio, and one over a swimming pool.
– George Brett –

I went to play golf and tried to shoot my age, but I shot my weight instead.
– Bob Hope –

Middle age occurs when you are too young to take up golf and too old to rush up to the net.
– Franklin P. Adams –

My game went so bad today, that I lost two balls in the ball washer.
– Author unknown –

Some golfers blast their ball from traps,
With one adroit explosion,
But others, out in ten perhaps,
Depend upon erosion.
– Richard Armour –

The best wood in most amateurs’ bags is the pencil.
– Chi Chi Rodriguez –

The golf swing is like a suitcase into which we are trying to pack one too many things.
– John Updike –

The only thing in my bag that works is the bug spray.
– Bruce Lansky –

They call it golf because all the other four-letter words were taken.
– Ray Floyd –

Through years of experience I have found that air offers less resistance than dirt.
– Jack Nicklaus, on why he tees his ball high –

We have 51 golf courses in Palm Springs. He [President Ford] never decides which course he will play until after the first tee shot.
– Bob Hope –

What a shame to waste those great shots on the practice tee.
– Walter Hagen –

When the ducks are walking, you know it is too windy to be playing golf.
– Dave Stockton –

When I die, bury me on the golf course so my husband will visit.
– Author Unknown –

While playing golf today I hit two good balls. I stepped on a rake.
– Henny Youngman –

Why am I using a new putter? Because the last one didn’t float too well.
– Craig Stadler –

You know what they say about big hitters…the woods are full of them.
– Jimmy Demaret –

You know you’re on the Senior Tour when your back goes out more than you do.
– Bob Bruce –

You’ve just one problem. You stand too close to the ball after you’ve hit it.
– Sam Snead –