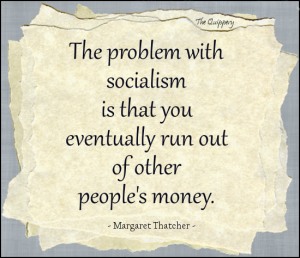 A fine city with too many socialists and mosquitoes. At least you can spray the mosquitoes.
– Ralph Klein speaking in 1990 as a Progressive Conservative MLA from the City of Calgary –

Canadians often point out that while the American constitution promises “Life, liberty, and the pursuit of happiness,” the constitution of Canada – written in the 1860s in England – sets a more modest goal: “Peace, order, and good government.”
– Robert Fulford –

Give me better wood and I will make you a better cabinet.
– John A. Macdonald –

Here in Canada, national political campaigns are brief: We begin by pretty much ignoring the whole thing for a few weeks – then there’s a debate, a little yelling, maybe some pointing, every leader buys a bunch of Timbits and, boom, suddenly it’s election day.
But in the United States, presidential campaigns last longer than all pregnancies and most wars.
– Scott Feschuk, MACLEAN’S Magazine, September 3, 2012 –

The trouble lies in the fact that a Canadian Prime Minister has never been exiled to the Arctic.
– Stefansson Vilhjalmeer –

To create a housing shortage in a huge country, heavily wooded, with a small population – ah, that’s the proof of pure political genius.
– Author Unknown –

A diplomat is a person who can tell you to go to hell in such a way that you actually look forward to the trip.
– Caskie Stinnett –

An intelligent Russian once remarked to us, “Every country has it’s own constitution; ours is absolutism, moderated by assassination.”
– Georg Herbert –

A politician can appear to have his nose to the grindstone while straddling a fence and keeping both ears to the ground.

Arguing with Liberals – It’s like playing chess with a pigeon. No matter how good I am at chess, the pigeon is just going to knock over the pieces, crap on the board, and strut around like it is victorious.
– Author Unknown –

By keeping the population in a state of artificially heightened apprehension, the government-cum-media prepares the ground for planting specific measures of taxation, regulation, surveillance, reporting, and other invasions of the people’s wealth, privacy, and freedoms.
– Robert Higgs -Fear: The Foundation of Every Government’s Power –

“Dad”, the little boy asked, “Do political plums grow from seeds?” “No, son,” replied the father. “They’re the result of clever grafting.”

Democracy consists of choosing our dictators, after they’ve told you what you think it is you want to hear.
– Alan Coren –

Democracy is an interesting, even laudable, notion and there is no question but that when compared to communism, which is too dull, or Facism, which is too exciting, it emerges as the most palatable form of government. This is not to say that it is without its drawbacks – chief among them being its regrettable tendency to encourage people in the belief that all men are created equal. And although the vast majority need only take a quick look around the room to see that this is hardly the case, a great many remain utterly convinced.
– Fran Lebowitz –

Democracy is the art and science of running the circus from the monkey cage.
– H. L. Mencken –

Democracy must be something more than two wolves and a sheep voting on what to have for dinner.
– James Bovard, Civil Libertarian (1994) –

Did you ever get to wondering if taxation without representation might have been cheaper.
– Robert Orben –

Dogbert’s Home Safety Tips #2 – Your household may have a member who can legally vote but probably shouldn’t.
– Scott Adams –

Fear mongering is the deliberate use of fear based tactics including exaggeration and continuous repetition to alter the perception of the public in order to achieve a desired outcome.
– Wikipedia –

For every action, there is an equal and opposite government program.
– Author Unknown –

He knows nothing; and he thinks he knows everything. That points clearly to a political career.
– George Bernard Shaw –

How does a bureaucrat wink? He opens one eye.
– Author Unknow –

In a democracy it’s your vote that counts. In feudalism it’s your count that votes.
– Author Unknown –

I contend that for a nation to try to tax itself into prosperity is like a man standing in a bucket and trying to lift himself up by the handle.
– Winston Churchill –

I should run for political office just to see what kind of scandalous dirt they dig up. It would be nice to piece together my twenties.
– Need to Vent Freely –

Managers and supervisors with large numbers of people under them – each with his own ideas – must sometimes feel like Charles DeGaulle, who once lamented, “Nobody can simply bring together a country that has 265 kinds of cheese.
– Author Unknown –

The best argument against democracy is a five-minute conversation with the average voter.
– Winston Churchill –

The only difference between a tax man and a taxidermist is that the taxidermist leaves the skin.
-Mark Twain –

The reason there are so few female politicians is that it is too much trouble to put makeup on two faces.
– Maureen Murphy –

Too bad that all the people who know how to run the country are busy driving taxicabs and cutting hair.
– George Burns –

True terror is to wake up one morning and discover that your high school class is running the country.
– Kurt Vonnegut –

What if I told you that the left wing and the right wing belong to the same bird.
– Indian Observation –

Why doesn’t a bureaucrat look out his office window in the morning? Because he needs something to do in the afternoon.–

A child can go only so far in life without potty training. It is not mere coincidence that six of the last seven presidents were potty trained, not to mention nearly half of the nation’s state legislators.
– Dave Barry-

Democracy means that anyone can grow up to be president, and anyone who doesn’t grow up can be vice president.
– Johnny Carson –

Foreign aid might be defined as a transfer of money from poor people in rich countries to rich people in poor countries.
– Douglas Casey, Classmate of Bill Clinton at Georgetown University –

Government’s view of the economy could be summed up in a few short phrases: If it moves, tax it. If it keeps moving, regulate it. And if it stops moving, subsidize it.
– Ronald Reagan –

I don’t think America should elect any President in 2016. We kneed to be single for a few years and find ourselves.
– Author Unknown –

I’d rather entrust the government of the United States to the first four hundred people listed in the Boston telephone directory than to the faculty of Harvard University.
– William F Buckley –

I feel like Trump and Clinton are two divorced parents, fighting for custody of us. And we just wanna go live with grandma.
– Laugh OR Croak –

If We Quit Voting, Will They All Go Away?
– Bumper Sticker –

If I were two-faced, would I be wearing this one?
– Abraham Lincoln –

I’ll be glad to reply to or dodge your questions, depending on what I think will help our election most.
– George H. W. Bush –

My definition of a free society is a society where it is safe to be unpopular.
– Adlai Stevenson –

Talk is cheap…except when Congress does it.
– Author Unknown –

The American taxpayer is another scarce natural resource that will be depleted unless used only when absolutely necessary.
– Author Unknown –

The government is like a baby’s alimentary canal, with a happy appetite at one end and no responsibility at the other.
– Ronald Reagan –

The most terrifying words in the English language are: I’m from the government and I’m here to help.
– Ronald Reagan –

…this (American) presidential campaign is about twice the average gestation period of an orangutan. The 2016 Canadian federal election will have a gestation period between that of a wolf (64 days) and a leopard (94 days). A mere nothing.
– David Shribman, Globe and Mail, August 4, 2015 –

Trump is what happens when you spent the last 7 Thanksgiving dinners lecturing your angry uncle from your Vox index cards.
– Clarice Feldman, American Thinker, November 13, 2016 –

Trump uses Twitter like a stick with words written on it. Think about a man using that stick to poke a bear. The stick keeps the man away from the bear, but he can still poke the bear with his stick. So he pokes and prods and pushes the bear with the stick.
– Willis Eschenbach –
Willis then asks the question – does it matter what is written on the stick (which is what the media dissects word by word) or is the only thing worth considering: what does the bear do when it is poked?

What could be worse for a creaky, cancerous political system than what the Democratic and Republican parties are brewing up? Nothing really. This is as bad as it gets… First: Do I even bother to vote?
For those who do cast a ballot, there is the even sadder choice: Which candidate do I loathe the least?
– Ron Fournier, The Atlantic, American election 2016

Years from now, when telling my future grandchildren about 2015, I will speak at length about the treachery, fibs, toxic scoops, deceits, tall tales, viral hoaxes, half-truths, tomfoolery, unverified junk and fake news.
“What a time to be alive,” I will say. “You just didn’t know what to believe in 2015.”
– From The Truth Wasn’t Out There –

3 thoughts on “Politics and Government Quotations”