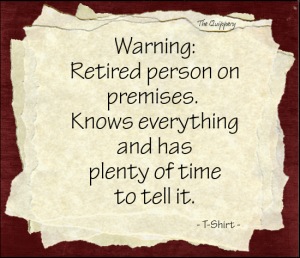 After investing as much as possible over the past 25 years, I think it’s time to rollover my retirement fund into pizza and a movie.
– Randy Glasbergen cartoon –

Dog to man: Now that you’re retired, you can finally do fun stuff you never had time for! Tip over the trash, chew on the sofa, bark at squirrels…
– Randy Glasbergen cartoon –

Don’t act your age, in retirement. Act like the inner young person you have always been.
– J. A. West –

Here’s our new retirement plan – at age 65, we’ll get divorced then marry other people who planned better.
– Randy Glasbergen cartoon –

I enjoy waking up and not having to go to work. So I do it three or four times a day.
– Gene Perret –

In appreciation for 25 years of service as a kindergarten teacher, we made you this gold watch from macaroni and glitter.
– Randy Glasbergen cartoon –

In 2055, retirement village residents play a game of “Guess what the tattoo used to be!”
– Cartoon –

I think I have enough money for a comfortable retirement. All I need to be comfortable is a pair of soft slippers and some loose underwear.
– Randy Glasbergen –

I see retirement as just another of these reinventions, another chance to do new things and be a new version of myself.
– Walt Mossberg –

It’s paradoxical that the idea of living a long life appeals to everyone, but the idea of getting old doesn’t appeal to anyone.
– Andy Rooney –

Relying on change under the couch cushion is a risky retirement plan.
– Wildt –

The question isn’t at what age I want to retire, it’s at what income.
– George Foreman –

The real reason many men don’t live long after retiring: “Well, after just a week at home, I’ve come up with a comprehensive list on how to do things more efficiently around here, honey…”
– Cartoon Author Unknown –

The thing to do is to make so much money that you don’t have to work after the age of twenty-seven. In case this is impracticable, stop work at the earliest possible moment, even if it is at a quarter past eleven on the morning of the day when you find you do have enough money.
– Robert Benchley –

Warning: Retired person on premises. Knows everything and has plenty of time to tell it.
– T-Shirt –

When a man retires and time is no longer a matter of urgent importance, his colleagues generally present him with a watch.
– R.C. Sherriff –

When a man retires, his wife gets twice the husband but only half the income.
– Chi Chi Rodriguez –