A dark brown shape, a jumble of wings and talons. Flying feathers, uprooted autumn leaves, a flurry of snow. When the ‘dust’ cleared, I realized it was a rather large hawk, and it was expertly dissecting a newly caught ‘something’ for lunch.

In all the photos you can see some of ‘the something’ on the bird’s beak. When I visited the location after the hawk had left, I could see that the kill was a bird. 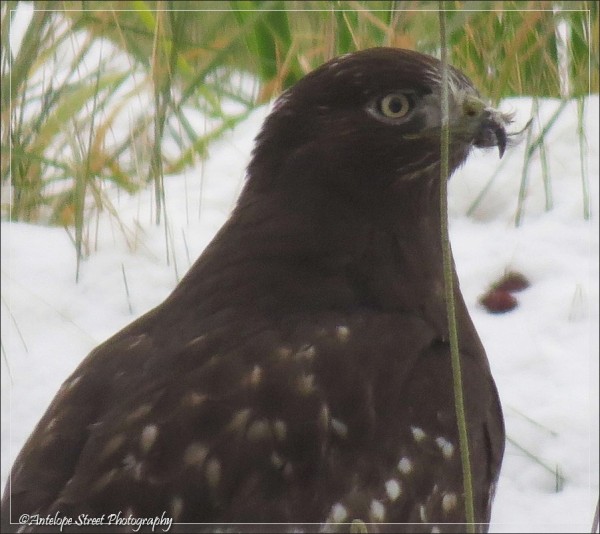 Many thanks to my go-to person for bird identification, Murray. My photos made identification difficult (shooting through a window on a dreary dull day), but he was reasonably confident this it was a dark morph Red-tailed Hawk. (Dark morph means that the pigment has an alteration that makes the feathers darker than the common colors usually seen. There are light morphs too. A study on morphs suggests that color polymorphism is due to different morphs being better adapted to different light conditions.)

The Feather Files
Name: Red-tailed Hawk – dark-morph
Species: Buteo jamaicensis
Native to and Migration: Resident or short-distance migrant. Most birds from Alaska, Canada, and the northern Great Plains fly south for a few months in winter, remaining in North America.
Date Seen: October 21, 2020
Location: North of Calgary, Alberta, Canada
Notes: Red-tailed Hawks are large birds with very broad, rounded wings and a short, wide tail. They can have a wingspan of 45-52 inches (114-133 cm). The female will be slightly larger in length and weight. Red-tailed Hawks have extremely variable plumage,