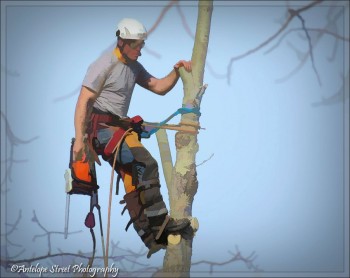 Piecing together the story

What I saw: The neighbour up the road hired a Tree Trimmer/Remover for a job that was well beyond the capabilities of the crew at the ‘Munching Moose Tree and Hedge Maintenance Service’.  The work was such that a man, with a chain saw, climbed a tall tree and then methodically removed branches. When that was done, he would then be able to take down a ‘skinny’ tree that wouldn’t damage the surrounding shrubbery nearly as much.

He had removed most of the branches when I walked by on the road. I stopped to watch, partly because it is quite interesting to see a man confidently using a chainsaw when he is about 25 feet up in the air… and partly because one of the Munching Moose was calmly eating the branches that the man had dropped to the ground.

In turn, the man was taking pictures of the Moose on his cell phone. (This is when I wished I carried a cell phone). I headed for home as fast as my little legs could carry me. Fifteen minutes later I was back at the scene with my camera, but by then the moose was gone and the man was back at work. I took a photo of the man in the tree.

What I was told: The next day I returned to the scene. The owner of the property was out front surveying some of the other work the tree trimmer had done. I told him that I had seen the ‘Treed’ man. The owner said the moose delayed the man’s descent for a while. The man kept throwing branches down towards the moose, hoping to scare it away. The moose just kept on eating. Eventually the man got low enough down the tree and the chain saw got noisy/menacing enough that the moose moved on.

From the perspective of a moose: As I was walking home, I spotted the moose in the aspen forest across the road from our place (about 150 meters (500 feet) from me.) There were at least four of them, possibly five.

I can just imagine the story that one of them told about the adventure the day before: “I tell you, it was raining branches yesterday! They just kept falling from the sky. I ate until I could hardly move!”

Photos of this group of Munching Moose. I’m making an assumption that the four moose we usually see (either in pairs or as a group of four) are always the same moose. One is a female with last springs calf. The other two are perhaps her calves from the previous year/years.

The newcomer to this group is a bull moose with antlers. It might be a younger male, since older males usually lose their antlers by now.

That’s it from the land of Munching Moose for this week!

What do the Truckers Want and How Has Trudeau Responded