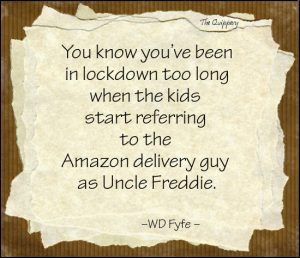 Canadian author WD Fyfe has written material for radio, newspapers and magazines. He has also published three books which can be found on Amazon: The Woman In The Window, Dogsh*t Without Tears, and Songs of Sylvia. His blog is  WD Fyfe. The following quotations are from his blog – either his own musings or occasionally borrowed from the brilliant philosopher Anon.

After enduring nearly a year of a planetary plague, I can now fully understand why all the women in Renaissance paintings are a little overweight and braless.

A written test before anyone is allowed to vote. Even multiple choice (guess?) would be better than nothing. (Stuff we need)

Deny it or not, in the 21st century, we’re wading in the shallow end of the intellectual swimming pool. Most people don’t know enough history to fill a mouse’s ear.

Don’t ask me what’s the stupidest thing I’ve ever done: I haven’t peaked yet.

Finally realizing that the reason you clean the house before people come over is you don’t want them to think you actually live this way.

I don’t care what wonders the newest wonder drug does, the “side effects” litany scares the hell out of me. Honestly, “may cause dry mouth, tremors, depression, heart attack, vomiting, internal bleeding, external bleeding, massive bleeding and your tongue’s going fall out” leaves me a little reluctant to try taking it for “occasional arthritis pain.”

If, at some point, you just lose it and confront the clothes dryer, demanding the return of all the socks it’s stolen over the years, you need to take a step back. (Advice to avoid Covid Burn-out)

I hate being the parent because I always have to say no to all the same things I loved doing as a kid.

It’s never a good sign when your fitness watch starts flashing stress warnings and you haven’t even gotten out of bed yet.

Realizing you’re excited about Valentine’s Day because you know chocolate’s going to go on sale the morning of the 15th.

The best thing about working from home is you don’t have to fight through all the lunch purses in the company refrigerator — and, sometimes, a pigeon sits on the balcony.

The only thing in the universe that’s worse than a Man Cold is being married to someone who has a Man Cold.

The other day I thought it would be cool if someone invented a hot veggie smoothie; then I remembered — it’s called soup.

Transparent toasters. So we can at least see what that maniac machine is doing to our bread! (Stuff we need)

When I was young, I fell off my bike and fractured my ankle. I rode my bike home. Last week, I stubbed my toe– and I haven’t left the sofa since.

When I was young, I thought I’d have a great career, a wild social life, a cool apartment and a retirement plan. I ended up with mismatched wineglasses and a toilet that won’t quit flushing unless you jiggle the handle.

When a two-year-old offers anybody a toy telephone, even the biggest badass in history will answer it.

When I was a kid, it was “normal” to write letters to your friends — with a pen — on paper. Since then, we’ve been through at least three “new normals,” and — like it or don’t — there are a bunch more to come.

With all the crap that’s going on in the world, these days I watch The Shining to relax.