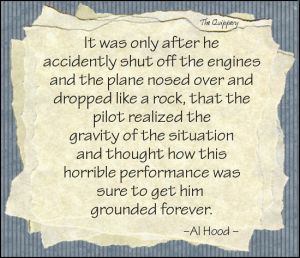 The English Department at San Jose State University has sponsored the Bulwer-Lytton Fiction Contest since 1982. It is a literary competition that challenges entrants to compose the opening sentence for the worst possible novel. The following submissions are the ones I liked best from the years 2011-2016.

As Farmer Brown’s train pulled out of the station at 10:00am traveling east at 50 mph, he had no idea that at that very same moment Farmer Green was 100 miles away on a west-bound train heading straight for him at 60mph and that because of a tragic track-switching mistake he was going to die in a fiery head-on train crash at exactly … uhm … well … err … sometime later that day.
— Shanon Conner, San Angelo,TX –

As his small boat scudded before a brisk breeze under a sapphire sky dappled with cerulean clouds with indigo bases, through cobalt seas that deepened to navy nearer the boat and faded to azure at the horizon, Ian was at a loss as to why he felt blue.
— Mike Pedersen, North Berwick, ME –

As the sun dropped below the horizon, the safari guide confirmed the approaching cape buffaloes were herbivores, which calmed everyone in the group, except for Herb, of course.
— Ron D Smith, Louisville,KY –

Corinne considered the colors (palest green, gray and lavender) and texture (downy as the finest velvet)and wondered, “How long have these cold cuts been in my refrigerator?”
— Linda Boatright, Omaha, NE –

Morgan “Bamboo” Barnes, Star Pilot of the Galaxia (flagship of the Solar Brigade), accepted an hors d’oeuvre from the triangular-shaped platter offered to him from the Princess Qwillia –lavender-skinned she was and busty, with two of her four eyes what Barnes called “bedroom eyes” – and marveled at how on her planet, Chlamydia-5, these snacks were called “Hi-Dee-Hoes” but on Earth they were simply called Ritz Crackers with Velveeta.
— Greg Homer, Placerville, CA –

“One cannot easily shake off old habits,” was all that retired Detective Tim O’Hara could say when, after rifling through the dead old man’s pockets (which, as he expected, were all empty), inspecting his throat,and forcing open his cold, stiff hand to get his fingerprints, he was gently but firmly pulled away from the coffin by his brother Harry and piloted out of the parlor under the perplexed stares of uncle Mel’s friends and relatives.
— Jorge Stolfi, Campinas, SP, Brazil –

On March 5, 1836, Lieutenant Colonel William Travis stood before his rag-tag revolutionary army, unsheathed his sword, and drew a line in the sand, followed by a smiley face, some crude stick-figure men, and a few choice words about Mexicans that the State Board of Education has deemed unfit for publication in this 7th Grade Texas History Textbook.
– Gwen Dallas, Austin, TX –

Their love began as a tailor, quickly measuring the nooks and crannies of their personalities, but it soon became the seamstress of subterfuge, each of them aware of the others lingual haberdashery: Mindy trying  to create a perfectly suited garment to display in public and Stan only concerned with the inseam.
— D. M.Dunn, Bloomington, IN –

The life of a mountain man like Jedediah Buckman is a simple one, a campfire to warm the person as well as the soul, a full moon to illuminate the forest as well as the mind, and game to nourish the body as well as the spirit, though one wonders how he could stomach beaver without mint jelly and a bold, young pinot noir.
– John Hardi, Falls Church, VA –

To Juliet’s mind, he was just a small town Romeo, and – bummer – a Capulet to boot, but the men pickings in Verona were slim, so even though her daddy would have a cat, she decided, “What’s the worst that could happen?” — John Hardi, Falls Church, VA –

When Glenn left the house, the sky was a satin Spinnaker Blue with White Feather clouds, the still-moist lawn and street were glossy Sunlit Glade and Bastion Grey, and, contemplating the to-do list jotted on Ivory Cream notepaper as he started the Sundance Yellow hatchback, Glenn knew he would go flat Condition Red berserk if his wife didn’t hurry up and select a color for the dining room.
– David Franks, Greenland, AR –

“Your eyes are like deep blue pools that I would like to drown in,” he had told Kimberly when she had asked him what he was thinking; but what he was actually thinking was that sometimes when he recharges his phone he forgets to put the little plug back in but he wasn’t going to tell her that.
— Dan Leyde,Edmonds, WA –

Last, but certainly not least is this one from one of the bloggers I follow: Al at The Cvillean

It was only after he accidentally shut off the engines and the plane nosed over and dropped like a rock, that the pilot realized the gravity of the situation and thought how this horrible performance was sure to get him grounded forever.
– Al Hood –

Part One of my favourite quotations in this series: Bulwer-Lytton Quotations