This time last year I was counting the number of itchy bites I got each day, mostly on my legs. I was convinced I was the victim of grass mites, mosquitoes and/or ants. Then one morning  I found three bites under one arm and a cluster of ten bites on my chest. Uh oh… 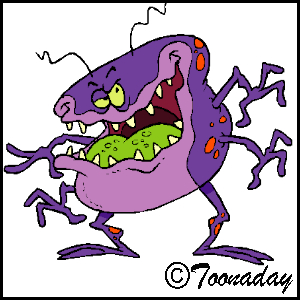 Bedbugs? Did we bring bedbugs home with us when we drove from Arizona to Alberta at the end of April? Yikes!

A number of years ago a friend’s home got bedbugs and at that time the treatment was to heat the whole house to an even temperature of over 120 F for at least an hour. It was an expensive procedure.

(By now I had worked myself into a lather, as they say). I called the local bug assassin company. They sent one of their  exterminators out that afternoon. He looked carefully at everything in our bedroom. He could not find any sign of bedbugs. He explained that didn’t mean there were no bedbugs – just not enough to constitute an infestation.

If I wanted, he could spray selected surfaces in our bedroom with a product that his company was having a lot of success with. He explained how he would use it and how safe it was for humans once it had dried. We could use the room again in four hours. Oh, and the cost was a bit less than $200.

I said “Make it So!” He instructed me to strip the bed and wash the bedding in hot water. That would kill any bugs residing in our quilts, pillows etc. He told me not to bother washing anything else. Any bugs that weren’t killed in the first few hours would track us down at night and they would be killed too because the spray would keep working for many months.

The spray was a complete success – that was the end of the bites.

Good night, sleep tight
Don’t let the bedbugs bite.
But if they do, then take your shoe and
Hit them till they’re black and blue.
– Childhood Rhyme –

Bedbugs were all but eradicated in the developed world by the 1950’s because of pest control products like DDT and chlordane – and the widespread use of vacuums and washing machines. Today, however, bedbugs are on the rise again because of increased travel and fewer chemical control products.

Adult Bed bugs are the size and color of a flat apple seed. They hide during the day in mattress crevices, box springs, baseboards, behind electrical switch plates, in picture frames, and even behind wallpaper. At night, the carbon dioxide we exhale lures them out of their hiding spots. Once a bed bug finds a host, it will usually feed for 5 to 10 minutes. Sometimes the feeding shows up as a pattern of three bites in a cluster or row. The host usually isn’t wakened by the feasting because bed bug saliva is an anaesthetic.

If you think you have bedbugs, call a professional. In my humble opinion, this isn’t a do it yourself job.