– As the 2021 Canadian Election ho-hums along, (ho-hum as in we have to accept that something unpleasant cannot be stopped from happening), Prime Minister Trudeau may have got the hint that some voters think the election was totally unnecessary AND find his messaging unpalatable. He is being met at some campaign stops with boos, heckles, jeers and yes, even small stones lobbed his way! (Mr. Trudeau says he wasn’t hurt and compared it to the time a woman threw pumpkin seeds at him during the Hamilton mayoral race in 2018…)

– Also election related – Elections Canada has branded all their election material with the slogan “It’s Our Vote”.  Strange phrasing – did someone make a mistake and leave out the ‘Y’ from the normal slogan “It’s YOUR Vote!” 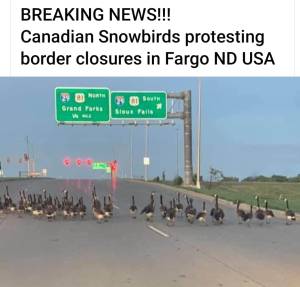 – Canadian tourists are still not allowed to drive into the United States. They can fly there, but they can’t drive there. Fortunately we have some Canadian ‘snowbirds’ in the USA (Canada Geese) to protest on behalf of their non-feathered friends.

– Last month, the Board of Governors of Toronto’s Ryerson University announced that the university would be dropping the name Ryerson. The University was named after Egerton Ryerson, who has been vilified in some circles for the role they believe he played in the creation of Residential Schools. Many scholarly publications refute these allegations. An article by Lynn McDonald in the Financial Post outlines who Ryerson was and the positive things he did for Indigenous people. This information matters little, of course, if individuals are only judged through the lens of the group they have been assigned to – white, male, colonist, racist… and so on.

– Alberta’s Municipal Elections are in October. Besides voting for Mayors and such, we get to vote on whether we want to adopt year- round Daylight Saving Time, which means we would keep summer hours all year round. I’ll vote for that.

It would be nice if we could have summer weather all year round too… of course, that would mean we would get to vote on whether we are ‘for’ climate change.

So, what is ‘Ho-humming’ in your part of the world?

What do the Truckers Want and How Has Trudeau Responded