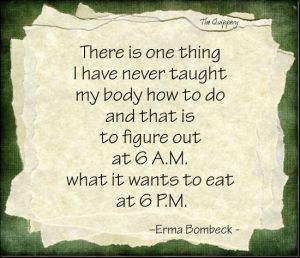 As a graduate of the Zsa Zsa Gabor School of Creative mathematics, I honestly do not know how old I am.

Do not take the chill off the room by turning the iron to the cotton setting.

Encourage independence in your children by regularly losing them in the supermarket.

Housework is a treadmill from futility to oblivion with stop-offs at tedium and counter productivity.

I didn’t fight my way to the top of the food chain to be a vegetarian.

I don’t know why no one ever thought to paste a label on the toilet-tissue spindle giving 1-2-3 directions for replacing the tissue on it. Then everyone in the house would know what Mama knows.

I haven’t trusted polls since I read that 62% of women had affairs during their lunch hour. I’ve never met a woman in my life who would give up lunch for sex.

I have seen my kid struggle into the kitchen in the morning with outfits that need only one accessory: an empty gin bottle.

I learned the importance of a man’s chair early in life. I learned that he may love several wives, embrace several cars, be true to more than one political philosophy, and be equally committed to several careers, but he will have only one comfortable chair in his life. I learned it will be an ugly chair. It will match nothing in the entire house. It will never wear out.

I’m trying very hard to understand this generation. They have adjusted the timetable for childbearing so that menopause and teaching a sixteen-year-old how to drive a car will occur in the same week.

I never leaf through a copy of National Geographic without realizing how lucky we are to live in a society where it is traditional to wear clothes.

It is fast approaching the point where I don’t want to elect anyone stupid enough to want the job.

I was browsing in a bookstore recently when I came across a book on child raising. It was a thin little volume of about fifteen or twenty pages that used the word “love” on every page and “reinforcement of self-esteem” on every other page. I leafed through it several times looking for the word that no parent should raise a child without: “No.” It wasn’t there. Mistake.

My idea of housework is to sweep the room with a glance.

My mom has a plaque just inside her front door that reads, “If we get to drinking Sunday afternoon and start insisting that you stay over until Tuesday, please remember we don’t mean it.”

My theory on housework is, if the item doesn’t multiply, smell, catch fire, or block the refrigerator door, let it be. No one else cares. Why should you?

Never have more children than you have car windows.

Once you see the drivers in Indonesia you understand why religion plays such a big part in their lives.

One thing they never tell you about child raising is that for the rest of your life, at the drop of a hat, you are expected to know your child’s name and how old he or she is.

Sometimes I can’t figure designers out. It’s as if they flunked human anatomy.

The hippopotamus is a vegetarian and looks like a wall. Lions who eat only red meat are sleek and slim. Are nutritionists on the wrong track?

There is one thing I have never taught my body how to do and that is to figure out at 6 A.M. what it wants to eat at 6 P.M.

When a child is locked in the bathroom with water running and he says he’s doing nothing but the dog is barking, call 911.

When your mother asks, ‘Do you want a piece of advice?’ it is a mere formality. It doesn’t matter if you answer yes or no. You’re going to get it anyway.

We are eagerly waiting for the arrival of baby Great Horned Owls. The parental units have nested in a Palm Tree in our front yard. (Snooze All Day, Hoot All Night). Sadly, one of the owl eggs escaped from the nest. 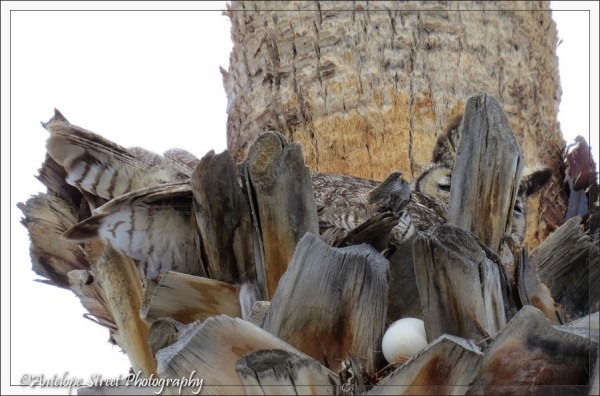 We sure hope the owl laid more than one egg! The escaped egg will never take flight!

Nature recognized that the Egg was eggsactly the type of ineggspensive, eggstremely simple container needed for many housing situations. With an eggsternal shell that would survive eggstreme conditions (barring eggsplosions), the egg was an eggsellent choice where eggsessive sharp edges were undesirable for the eggspectant mother when it was time to eggspell it.
– Margy –

Here is a link to some of my other Egg posts: An Eggsellent Arrangement of Eggs.

Which Company Produces the Most Tires?

The LEGO group produced over 318 million toy tires in 2011 and was recognized by Guinness World Records as having the highest annual production of tires by any manufacturer.
Compare that to the top three tire manufacturing companies (by revenue):  Bridgestone (manufacturing 190 million tires), Michelin (184 million), Goodyear(181 million).
– Source Unknown –

This car show (in Fountain Hills, Arizona) is one of the largest in the country. This year there were just over 1000 cars and 10 military helicopters. Attendance was probably over 30,000 spectators. Car clubs included Ferrari, Lamborghini, Porsche, McLaren, Maserati, Jaguar, Corvette, Viper, Ford GT, Lotus, Audi, BMW, Mercedes-Benz, Alfa Romeo, DeTomaso, DeLorean, Mustang, Cadillac and others.

I talk to my BMW, just in case it’s a transformer
– Author Unknown – 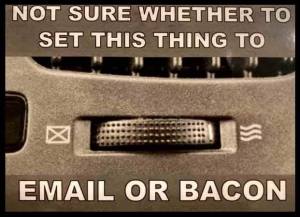