On April 23 the Owlets were still in the nest, looking far less fluffy and much more feathery!

Their ‘ear’ tufts were more visible too. Owl experts don’t really know what the purpose is for these feathery tufts. They don’t have anything to do with how well the owl hears since an owl’s ears are on the side of the head, not the top!

The first owlet left the nest on April 25. Several alert neigbours reported seeing the young owl walking from one front yard to another! 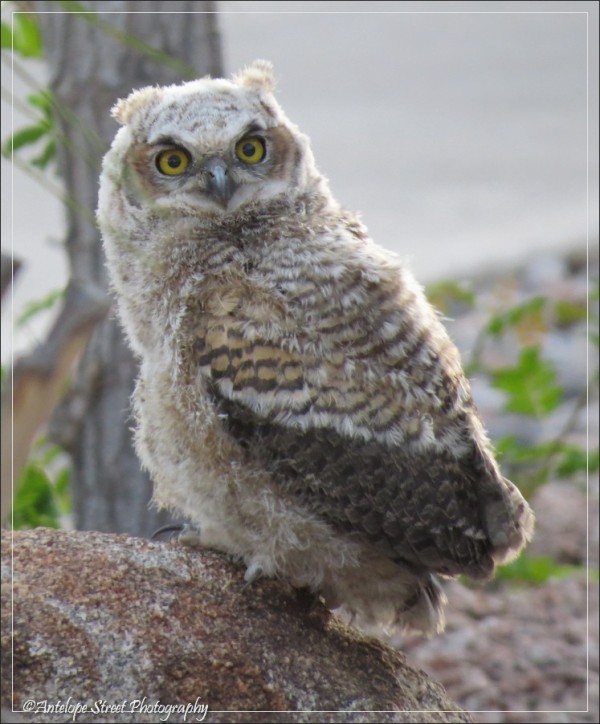 I finally caught the ‘walking owl’ in action at dusk on April 27. The owlet was perched on a rock, then hopped down and continued it’s walkabout.

One parent owl was in a nearby palm tree hooting, while the second parent distributed the evening meal.

One owlet was still in the nest, maybe enjoying how roomy it’s quarters are now.

On April 28 the owlet in the nest was still looking down from it’s high perch.

The Adaptability of Great Horned Owls

Now that I’ve watched baby Great Horned Owls in both Alberta and Arizona, I realize there are differences in the behaviour of the owlets once they leave the nest. In Alberta, the owlets learned to fly from spruce branch to spruce branch. They didn’t spend time on the ground until much later when they were learning to hunt. The Arizona owlets are starting at ground level and will only become tree dwellers if they can hop/climb up something, or when their wings are strong enough to get them airborne!

– though an owl might dive at cats, dogs and people if they have a nest
in the area, it is unlikely they would take a dog or cat to eat. They
cannot lift much more than their own body weight, which is 2-3 pounds. Apparently it is urban legend that birds of prey hunt pets…

– an adult owl will have a wingspan of just under 4 feet. The female owl
will be bigger than the male.

11 thoughts on “Great Horned Owlet Walks Around the Neighbourhood”