Gary Larson , of  Far Side Comic fame, invented a phobia –  Anatidaephobia. He defined it as “the fear that somewhere, somehow, a duck is watching you.” (Anatidaephobia comes from the Greek word “anatidae”, (referring to ducks, geese or swans and “phobos” meaning fear.)

If I was inclined to have a phobia, it could certainly involve geese and ducks! Every spring, a pair of Canada Geese stand on the rocks behind our house. They do this every morning for several weeks – assessing, I suppose, the probability of whether there will be a slough around the rocks this year. I watch them and they watch me. 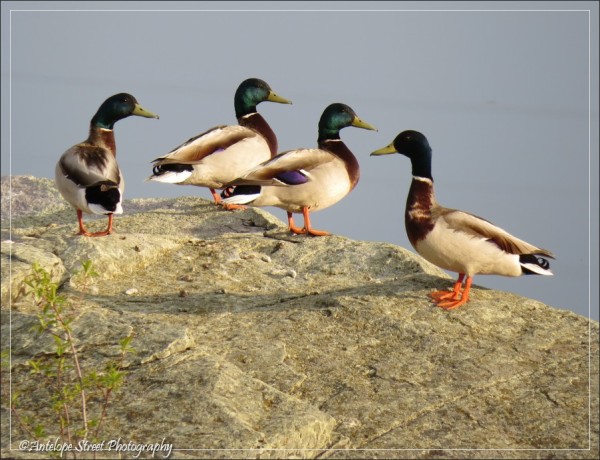 If the geese aren’t on the rock, then Mallard ducks might be. They watch me and I watch them. 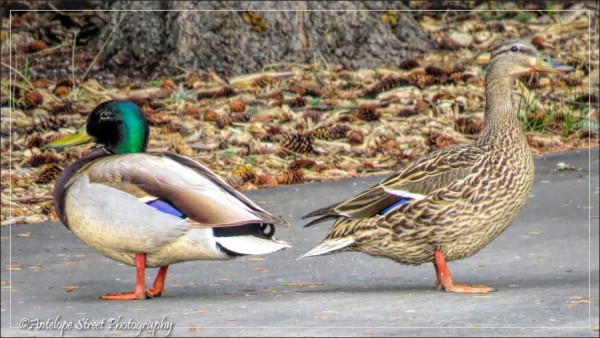 On the other side of the house, Ma and Pa Mallard settle down on the driveway each morning. I can’t begin to guess why they do that, but… I watch them and they watch me.

The Geese and Ducks certainly don’t make me fearful, but if I try to approach them – they fly away. I suppose you could say they have Anthropophobia (fear of people)!

While I don’t have any phobias and I don’t think I Hate anyone or anything,  I really dislike certain creatures like Snakes, Scorpions and a certain politician.

If it looks like a duck, and quacks like a duck, we have at least to consider the possibility that we have a small aquatic bird of the family anatidae on our hands.
– Douglas Adams –

I heard the Secret Service had to change their commands. They can’t say “Get down!” anymore when the President is under attack. Now it’s “Donald! Duck!”
– Joke during the Presidency of Donald Trump –

9 thoughts on “Watching Them Watching Me”