Remember that the most beautiful things in the world are the most useless; peacocks and lilies for instance.
– John Ruskin –

Gardening – It comes in handy when you need to hide the bodies.

If a plant is sad, do other plants photo-sympathize with it?

Well,” said Pooh, “what I like best,” and then he had to stop and think. Because although Eating Honey was a very good thing to do, there was a moment just before you began to eat it which was better than when you were, but he didn’t know what it was called.
– A. A. Milne –

In a month or two, my flower beds should look like this…

One of the most delightful things about a garden is the anticipation it provides.
– W. E. Johns –

Before that, though, there will be lots of non-gardening weather…

Sunshine is delicious, rain is refreshing, wind braces us up, snow is exhilarating; there is really no such thing as bad weather, only different kinds of good weather.
– John Ruskin –

which gives me sufficient time to put the photo through my filter factory.

A Spanish magician prepares the audience for his final trick…
He yells “UNO!”
The crowd falls silent in anticipation.
“DOS!”
Everyone’s eyes are wide, laser focused on the performer.
Then, the magician vanishes… without a tres.
– Author Unknown –

What are you looking forward to in the next few months?

‘Out Back’ is a fenced in area where the deer and the moose are NOT allowed to wander. For many years it was mostly grass because it was where our septic field was until the field got flooded with abundant rain. We moved the field to higher ground – which gave us more landscaping freedom. I started by letting the grass grow taller in some areas, creating wide, sweeping grass paths. The grandchildren loved racing along them and playing hide and seek. 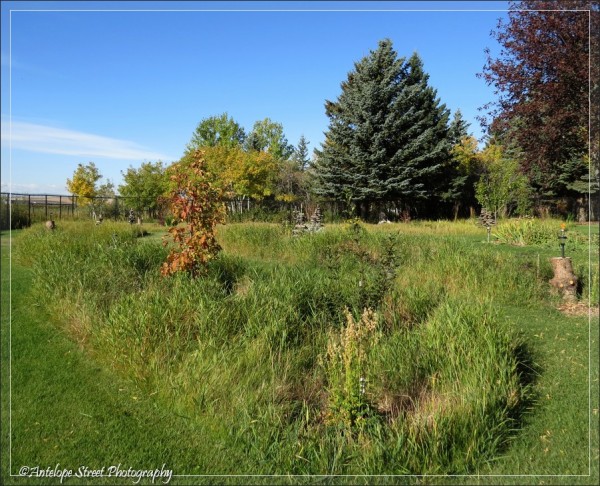 A few years ago I started letting more and more grass grow taller, creating a series of grass islands. I started planting perennials, bushes and trees in the islands. This is what it looked like last fall, from the perspective of someone just over 5 ft tall…

Enter The Car Guy, who had bought himself a Drone and was looking for photo projects. At this Drone height, you get a better idea of what my project looks like.

Higher still, and another perspective. You can see the industrial warehouses that are starting to ‘creep’ out our way.

Way, way up – a clear view of nine of the ten grass islands. Over the next few years we can mow less pathways, add more shrubs and trees and let the islands get bigger.

Hopefully everything will have matured by the time the farm behind us is developed into an industrial park!

The aspen and spruce wooded area at the top of the photo is not fenced. It forms a small part of a large wooded habitat that is home to deer, moose, fox, coyotes and many other mammals and birds.

I can hardly wait until spring time – so many outdoor gardening plans – and not a single one of them depends on the stage we are at with this pesky virus!

Two more plants that grow prolifically in our woods are the Cotoneaster (it is such a temptation to call it a ‘Cotton Easter’ bush…) and the wild raspberry. Both arrived in our woods from bird droppings.

Autumn is a second spring when every leaf is a flower.
-Albert Camus –

Dogwood, which can be native to Alberta parkland forest understories, is a relatively easy bush to grow. It has interesting flowers in the spring, nice berries in the summer, great fall colour, and beautiful bright stems for winter colour.

We have several on our property. They arrived via bird droppings. I think that is quite amazing, actually. Who knows how far away the bird was when it ate some seeds (berries) from a dogwood. The seeds had to have been at just the right stage of ripeness. Then the bird flew some distance and pooped on a piece of ground that was a receptive host. The dogwood seed had to germinate, put down roots, and out muscle the plants around it in order to survive.

This year the dogwood got big enough for me to see it. It is about 3 feet (1 meter) high. It is not too far from a path I walk regularly – not hard to miss when the leaves turned bright red.

In contrast, there is a red-berried elder on our property that grew to be four times that size before I finally discovered it. It was delivered by bird poop too, but not in a location that it can easily be seen.

The human spirit needs places where nature has not been rearranged by the hand of man.
-Author Unknown –

This vine is a prolific deciduous climber, reaching heights of 20–30 m (70–100 ft) in the wild. It climbs smooth surfaces using small forked tendrils tipped with tiny strongly adhesive pads 5 mm (3⁄16 in) in size.

We have Virginia Creeper growing, under strict supervision, in two locations. The one in the photo is in a large planter box. It has been growing there for 20 years or so. I shear it back a few times each year so that it doesn’t take off across the patio and out onto the driveway. If left to do what it does best, it would engulf a small car in just one growing season.

The other location is next to a quonset steel building where it (and six of its siblings) are supposed to climb up the side of the building. To date, the strong adhesive pads are not having much luck climbing the shiny metal. Maybe next year.

Trembling (aka Quaking) Aspen is the most widely distributed tree in North America, and is known for the distinctive rustling sound its leaves make in the breeze. It is also the preferred wood for that most Canadian of animals – the beaver. These industrious creatures use it as a food source and as the main structural wood in their dams and houses.

Trembling Aspen reproduces by root propagation. This creates clones of the original tree, which can produce pure stands covering a large area. The clones are considered as one individual so these colonies are some of the largest and oldest living organisms on the planet.
– Canadian Woodworking and Home Improvement –

We have a four or five stands of these trees on our property. Each stand has dozens and dozens of trees of various ages. This was an exceptionally good growing year for them because we did not have many aspen leaf roller caterpillars. Instead, there are dark spots on the leaves – perhaps a fungus of some kind. Aspen are susceptible to many insects and diseases, which is why mother nature gave them the ability to grow up fast to compensate for the fact they die relatively young.

In Arizona, we live in a community that encourages low water use desert plantings. This means gravel yards instead of grass. Landscaping is done with cactus, succulents and plants that don’t use much water. Residents are also expected to keep weeds under control.

This past spring, the vacant house and lot next door to us quickly become overgrown with a carpet of weeds. Most of these weeds had tiny flowers, so the overall effect was greenly messy. As the Arizona sun got high and hot, the weeds started to die, and the yard started to look brownly messy.

I was less than impressed with living next door to a weed seed factory… but my attitude changed when I photographed the plants with my macro lens! Suddenly they were wild flowers!

Crypthantha (If you hover over each photo, you can read the caption. Click on the photo to see the full size version.)

The Cryptantha is a tiny flower.

A weed is a plant that has mastered every survival skill except for learning how to grow in rows.
– Doug Larson – 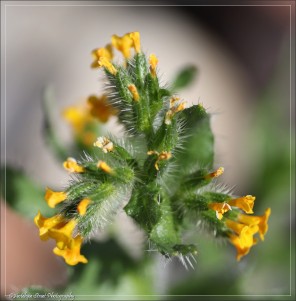 Another tiny flower is this Common Fiddleneck.

Crabgrass can grow on bowling balls in airless rooms, and there is no known way to kill it that does not involve nuclear weapons.
– Dave Barry – 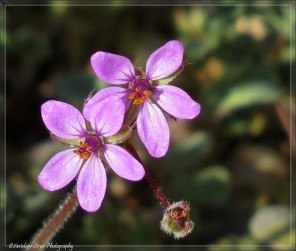 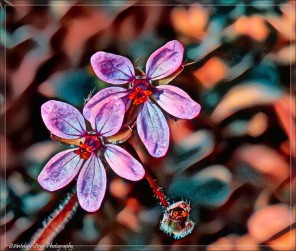 Plant and your spouse plants with you; weed and you weed alone.
– Author Unknown –

Another small member of the Erodium family. 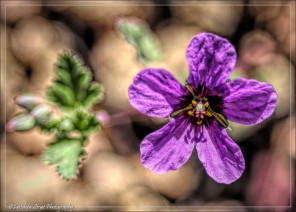 One person’s weed is another person’s wildflower.
– Susan Wittig Albert –

One small member of the Phacelia family.

So many weeds, so little Thyme.
– Author Unknown – 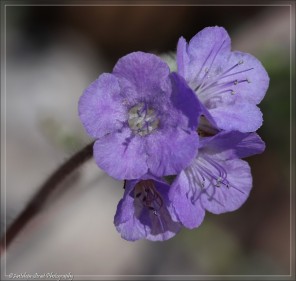 California Poppy – there was only one of these plants in the weed patch, but the bright yellow flowers really stood out!

It’s a wildflower if you want it and a weed if you don’t.
– Author Unknown –

Lupin – these are quite common roadside flowers in the spring, but they were few and far between in the weed patch. 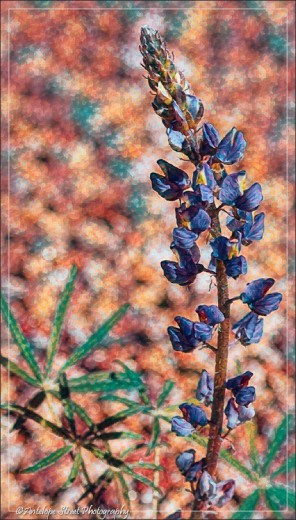 How is your ‘Garden of Weedin’ doing this summer?

Incident Report:
Date: March 2, 2020
Location: Our property on an Arizona Street (a cul-de-sac)
Nature of Incident: Hit and Run
Details: Truck pulling a trailer misjudged their turning radius. Golden Barrel Cactus was unable to get out of the way.
Medical Analysis: Bifurcation of cactus with distal crushing on road side
Patient Prognosis: Certain Death 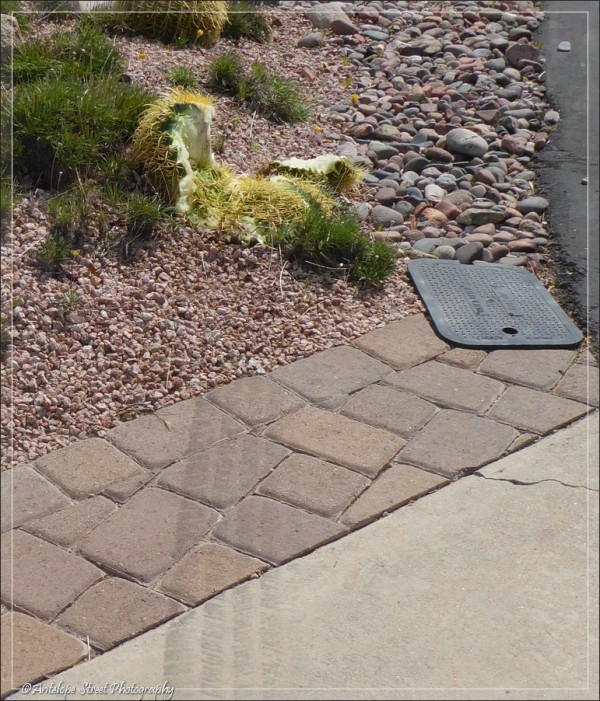 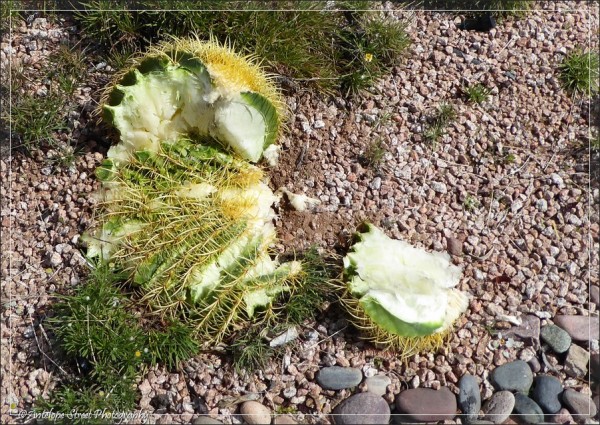 This year the mower arrived earlier in the season than normal and chopped off the Orchid flowers before they had a chance to go to seed. It would be an understatement to say this made me very sad. I had been visiting them and taking pictures of them every morning when I went for my walk. It was while I was photographing them that I discovered the delicate flowers of a meadow rue nearby. (Also a plastic lid and a red straw, which I’ll remove once I don’t need them to accurately mark the location of the now decapitated flowers…)

I first found the Lady’s Slipper in 2011, and while I would have loved to have one growing on my property, I contented myself with visiting them in the ditch (especially since they have established a dozen or so new clumps so close to our place.) The mower changed all that. I’m going to research the probability of success if I transplant one or two of the plants onto my property…

As for the Meadow Rue – turns out I have hundreds of them in our woods, now that I know what to look for!

Plant Profile
Common Name:  Lady’s Slipper Orchid (yellow)
Scientific Name:  Cypripedium parviflorum
Hardiness:  Zones 3-7 – found in many parts of Canada and the United States. It is a hardy plant.
Growth:  A Perennial that varies in height depending on location. In the north it can often be found in open locations with full sun. In other locations it will be found in cool rich woods.
Blooms:   Large deep-yellow flowers with long yellow-to-brown corkscrew lateral petals. Blooms over a 2 to 3 week period in early to mid spring.