My Mitts decided not to go outside anymore: 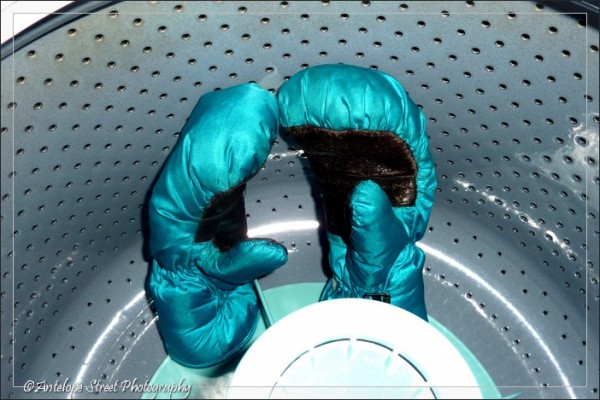 “We’re still wet. Could you start the dryer again for us?”

My Mitts have something to say about snow: “We give up!”

The snow has started to melt (finally), and a puddle formed in the dip in the driveway. The temperatures dropped well below freezing last night, and this morning the puddle had frozen into intricate ice art. By noon, the puddle had thawed, and the art was gone… 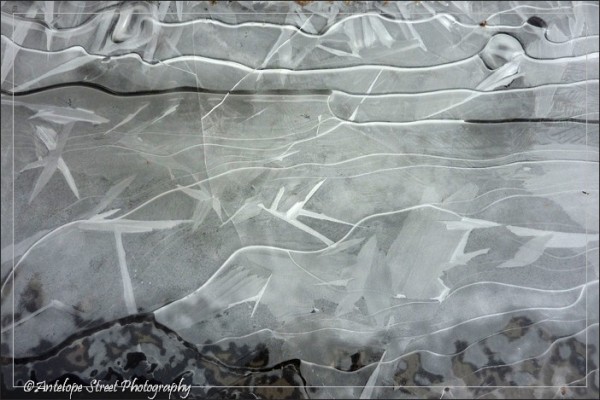 Snowflakes are one of nature’s most fragile things, but just look at what they can do when they stick together.
– Author Unknown – 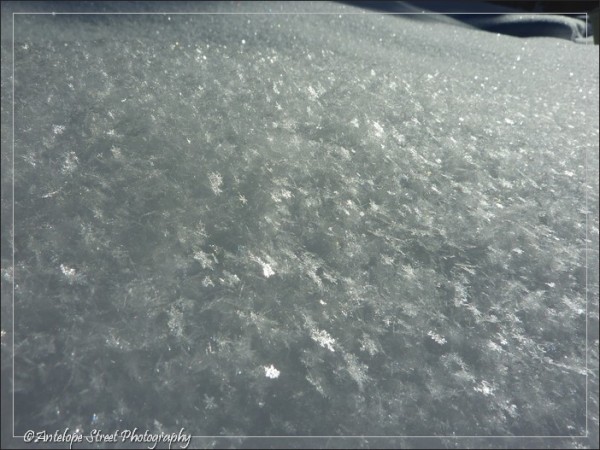 We spent a few days in the mountains of British Columbia. It snowed  nearly every day while we were there. One of the snowfalls produced giant snowflakes! Each flake was clearly visible to the naked eye – lacy six sided crystals sparkling in the sun.

On the giant snowflake day, I spent the afternoon outside wading through knee-deep snow and taking pictures. When I looked back to where I had been, I was surprised to see how crooked a path I was making! 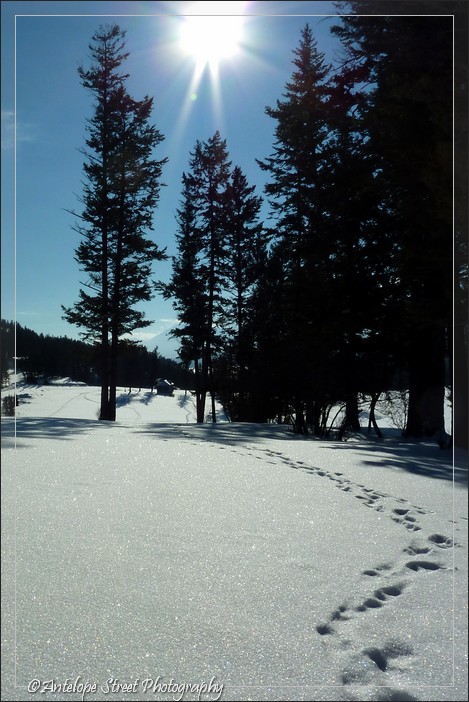 In the foreground you can see how the sun was lighting up the big snowflakes. You can also see the very crooked path I had made two days before. All I can say is that the scenery makes it hard to concentrate on walking the straight and narrow.

In one of the forest clearings I came across tracks going every which way – my nemesis, the deer. Well, not my deer, because they are back home, probably sitting in my back yard enjoying the quiet. They like it when we go away and leave them alone to eat my yard in peace.

The topic of weather is often how we start a conversation in Canada. While we don’t always enjoy the extreme climate that nature sends our way, we sure do like to brag about it.

Here at the Red House, it has been a very cold, snowy winter. Just what is very cold? Well, we have had many, many days with temperatures  below -20 C. Just how much snow? Lots… but snow is a flighty substance. The least little bit of wind sends it scurrying about the yard, piling deep in some areas and leaving others with just a skiff. A skiff of snow. There are all kinds of words to describe snow. Skiers beg for powder snow, which ends up as packed powder at the end of the day. Avalanche patrols look for new snow on top of crusty snow. Snow fences try to control where snow drifts. Whiteouts mean you should stay home, because you won’t be able to see much of anything. Soft snow is good for making snowmen. Slushy snow means that maybe the snow boots can be replaced with rain boots.

All this snow gives us one more snow term: Snowbirds. These are not really birds, but flightless  mammals that head south for part or most of a Canadian winter. Actually, some of them fly, using carriers such as Air Canada or WestJet. But lots of them prefer the open road, navigating all types of recreational vehicles destined for the warm weather of Southern USA or Northern Mexico. It is estimated that the Snowbird population is approximately 9 million strong, though not all of them would be Canadian.

Winter can be a very pretty time of year, though the temperatures might mean I just run outside and take snow photos then dash back inside.

Canadian Seasons have been described as: Six months of winter, and six months of poor sledding. These can be broken down into: almost winter, winter, still winter and road construction season. To be more specific, the four seasons are: June, July, August and Winter.